For the upcoming season some major changes are being undertaken along with a full tear down and rebuild. In the previous post we looked at some of the damage which the car suffered over time and also at the new steering setup. Since then Daryl sent the car to have some much needed modifications done to the body before it is sent to bodywork and paint.

For those who are viewing this post for the first time, I’ve provided link to the entire build below. 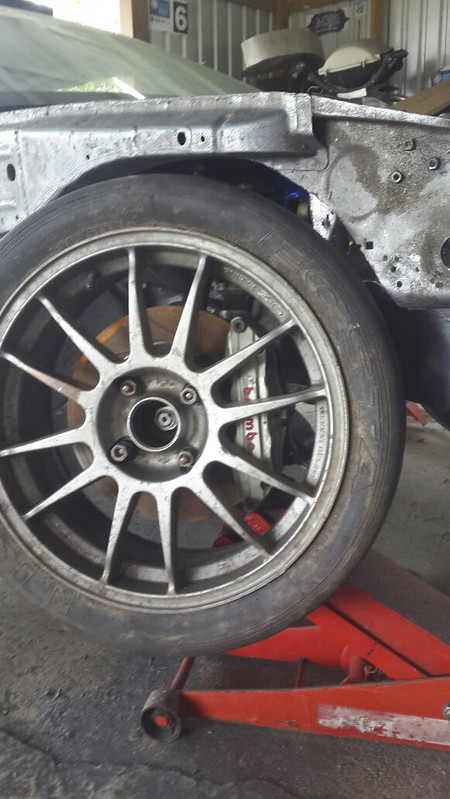 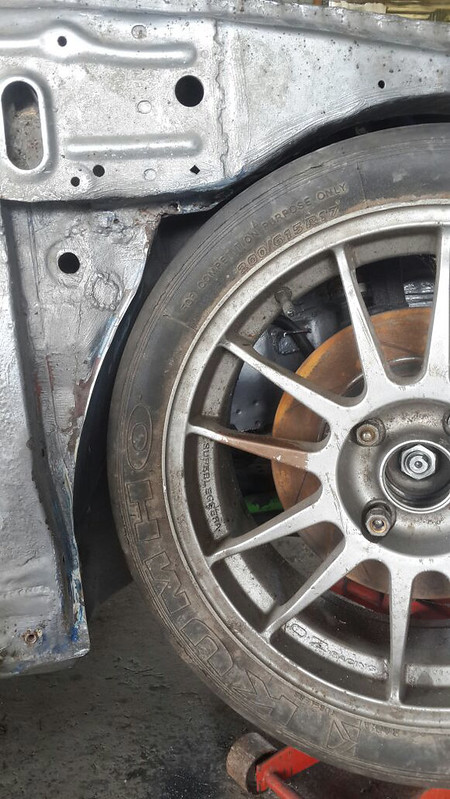 The car was sent off to Guava Tech where Stuart White was in charge of the necessary adjustments needed to be made to accommodate larger diameter wheels. For the upcoming season Daryl plans on using a 17″ wheels which will be an upgrade from his previous 15″ wheels. Checking to ensure there isn’t any rubbing issues under the most extreme shock travel and with the full lock in. 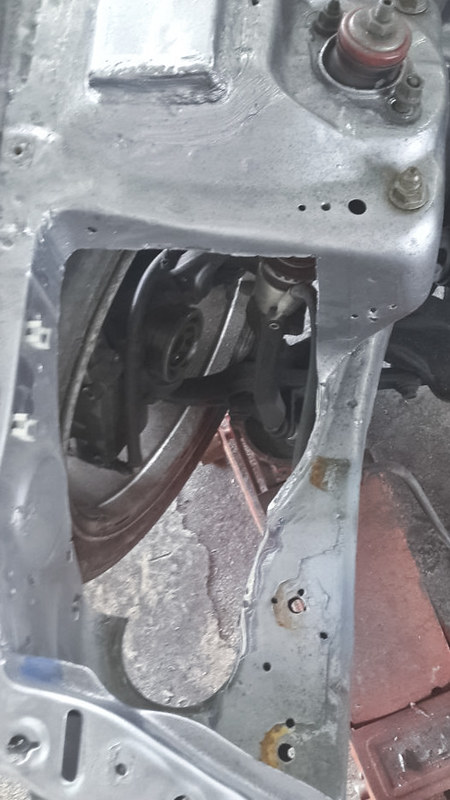 To allow for the extra travel and clearance, the wheel well needed to be redesigned to house the 17″ wheels… 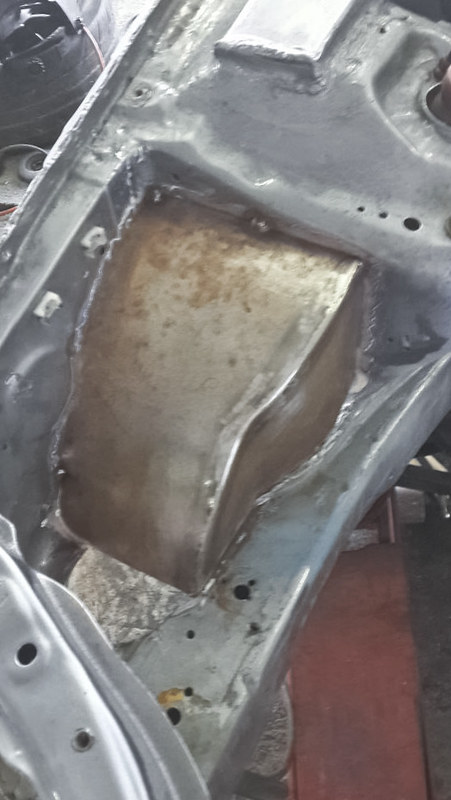 A look at the redesigned wheel well… 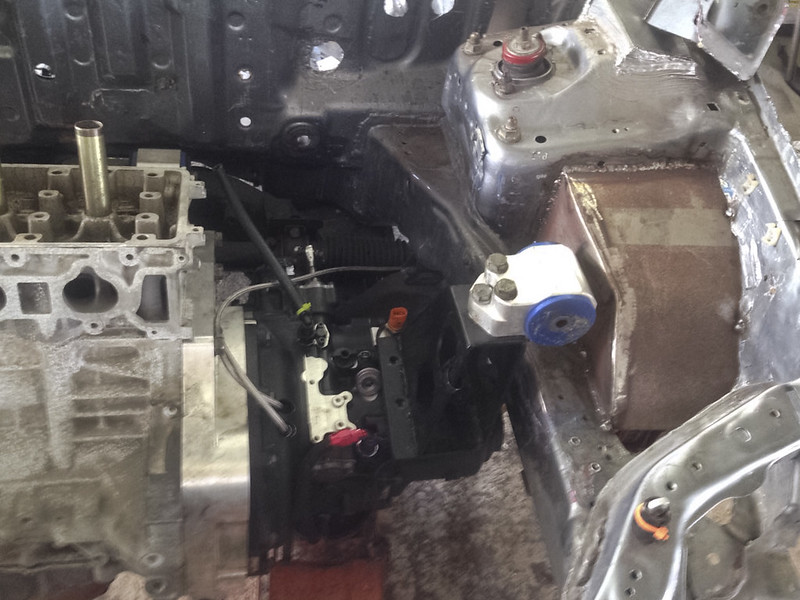 In order for the wheel wells to be redesigned, the bracket between the mount and the chassis had to be removed. 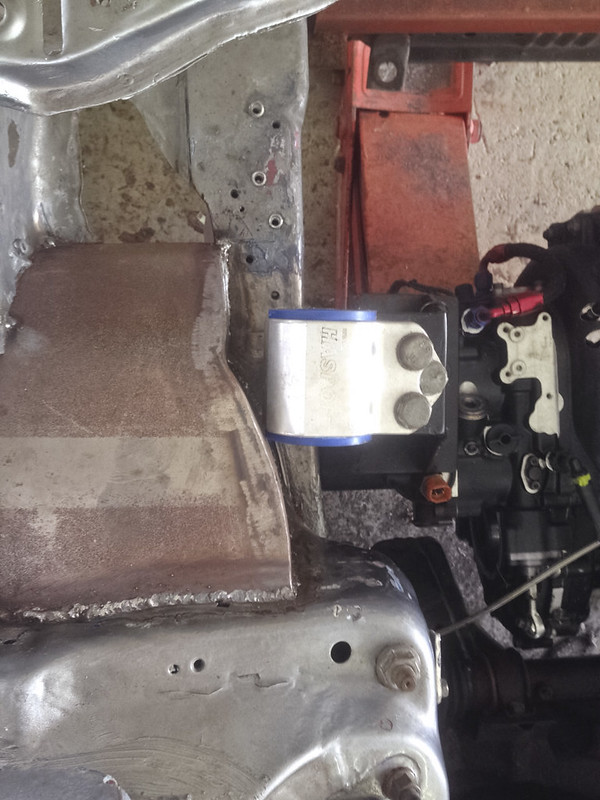 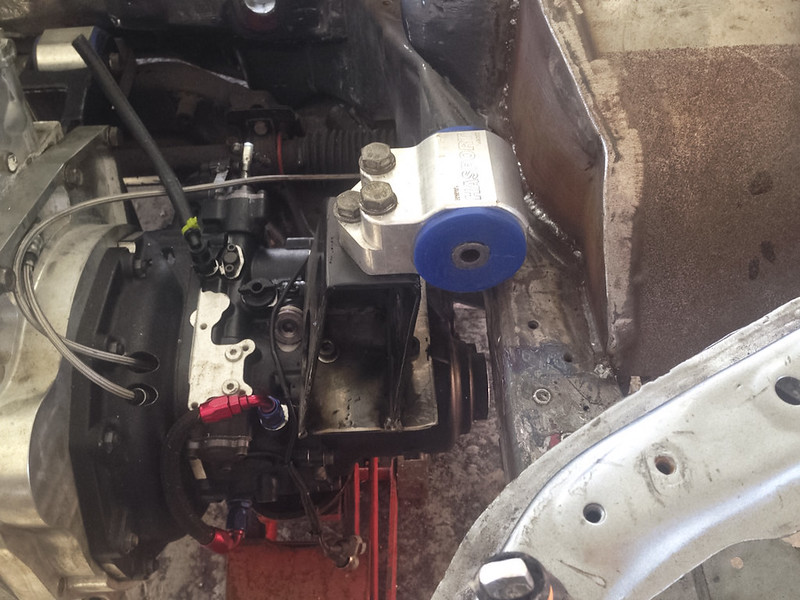 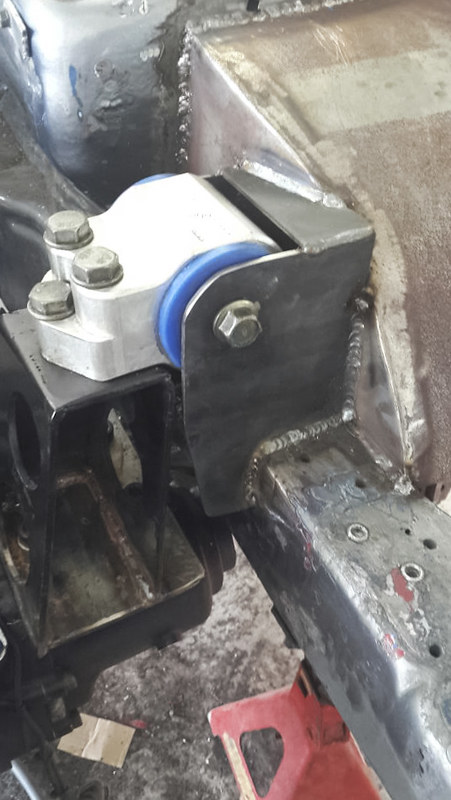 A look at the final product… 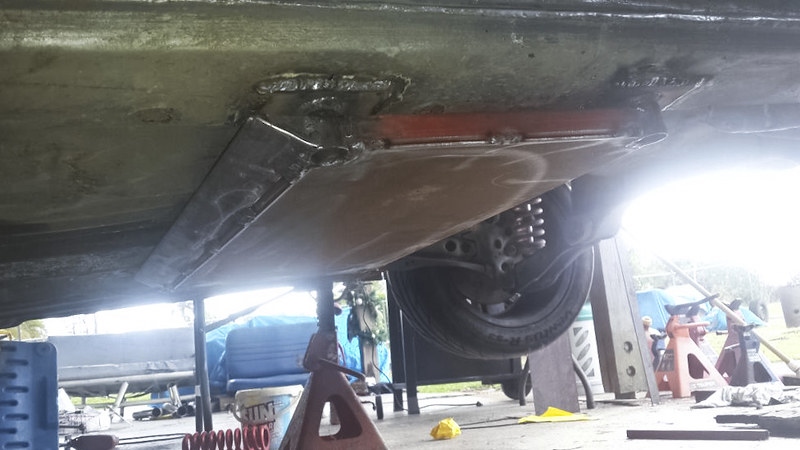 With the car being underweight, Daryl has to add weight to the car to make it legal to race in his group. Previously, he had a problem where the weights would fall off – with the car being down for repairs, Daryl took this time to resolved that issue. The new weight tray bolts to the underbody of the car and can be removed if necessary. 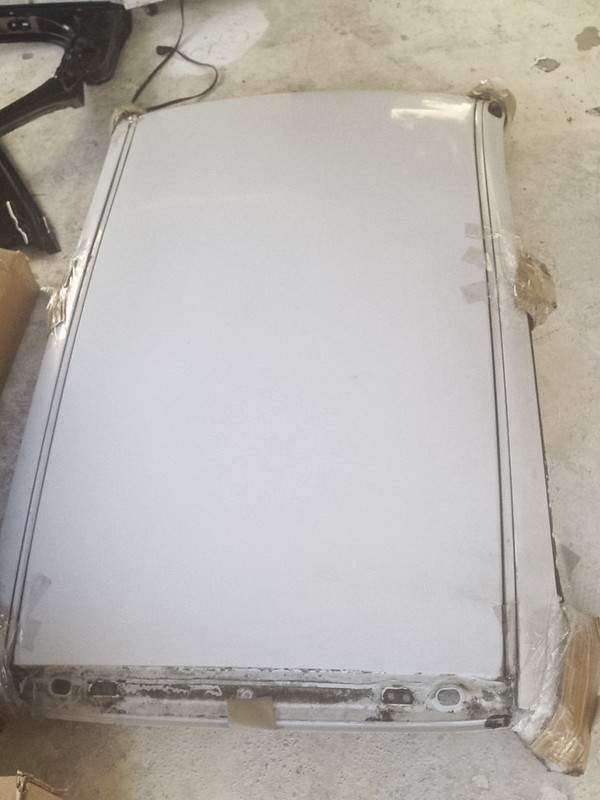 Due to the roof being so badly damaged from an incident where the hood blew up, Daryl took this opportunity to replace the entire roof… 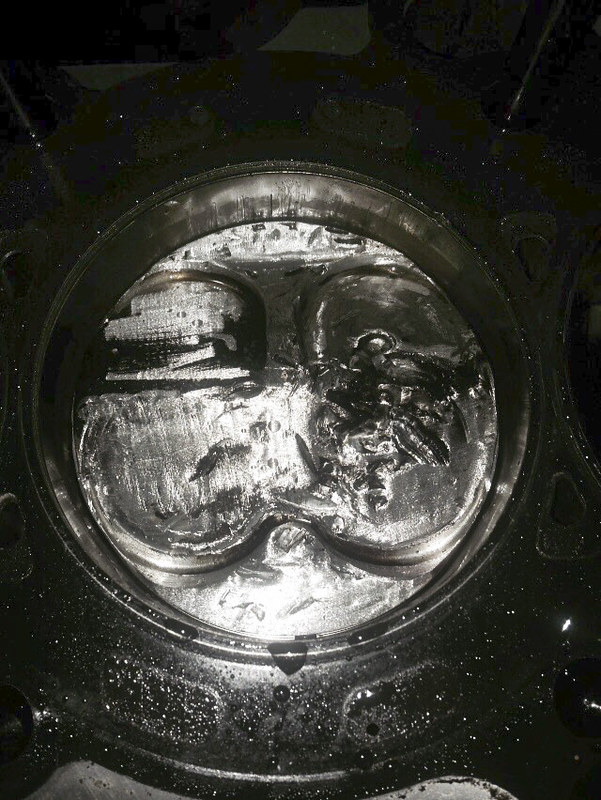 The next step forward was to deal with the motor, which dropped a valve and damaged a piston the morning of rally causing some damage to the cylinder. 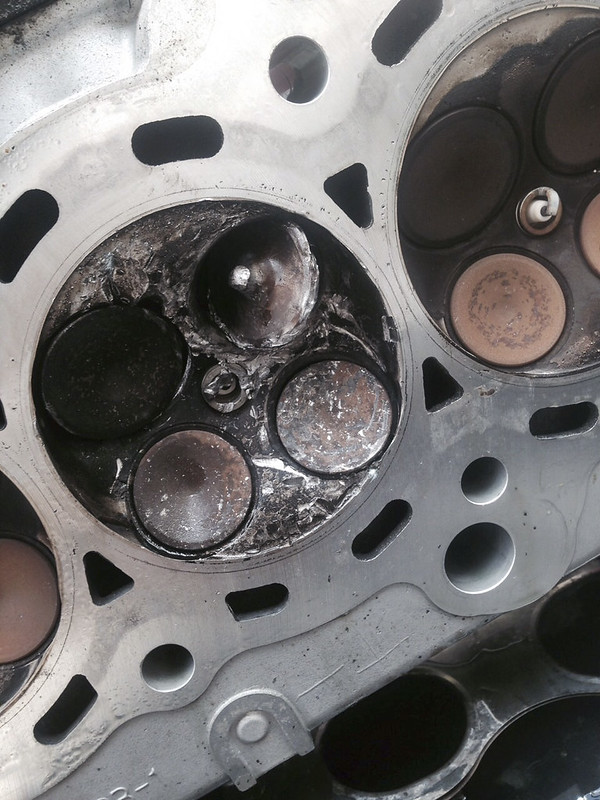 The guys were able to change the head and replace the damaged piston all in time for the rally, where Daryl went on to win his group. 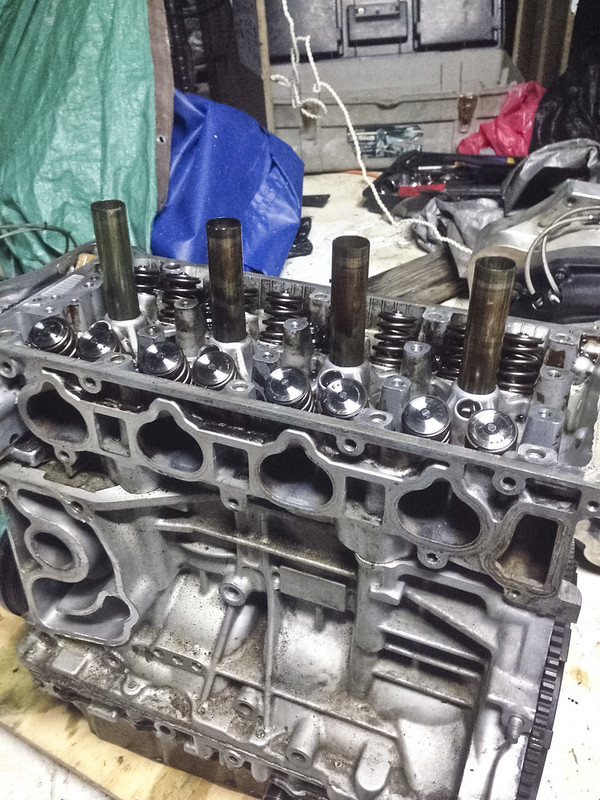 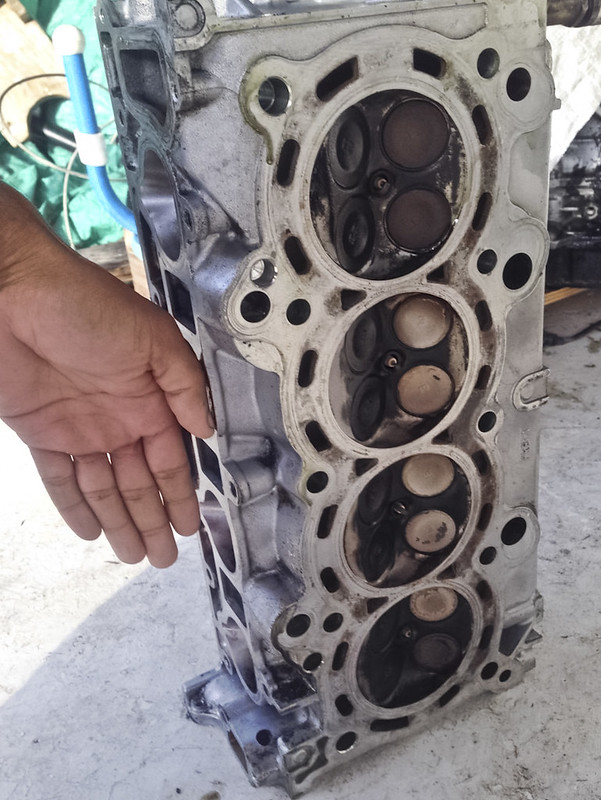 Now the season is over, Daryl decided to pull apart the motor and fully address these issues while making some changes for the upcoming season. So far a head was sent off to Drag Cartel, however a final decision hasn’t been made on the plans for the block. 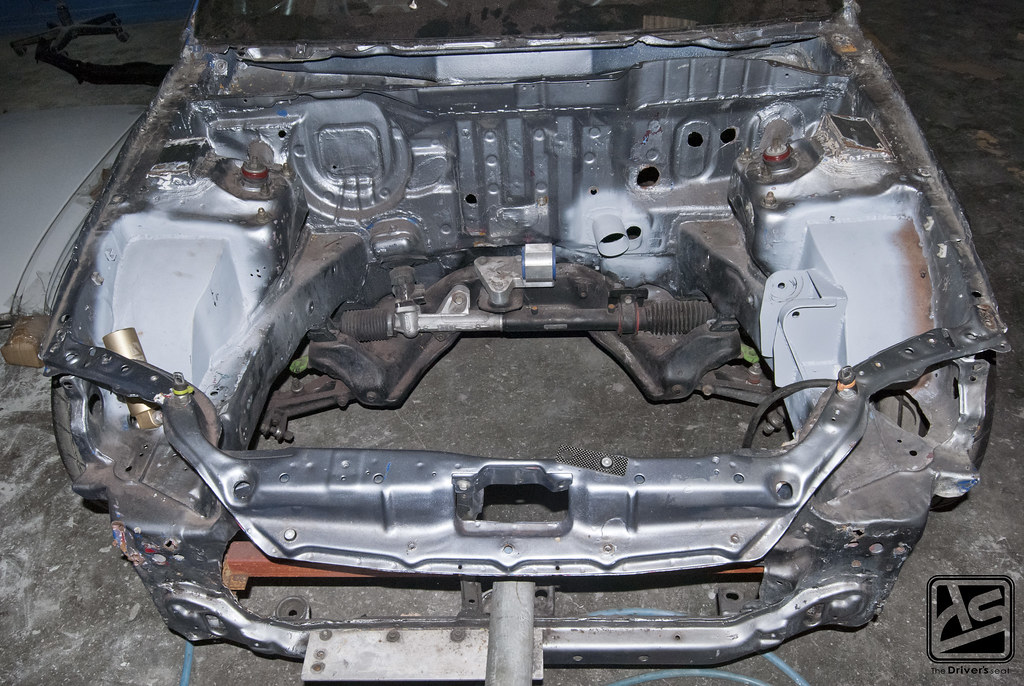 During that time, the shell was sent over to MQI to begin the body work phase of the rebuild… 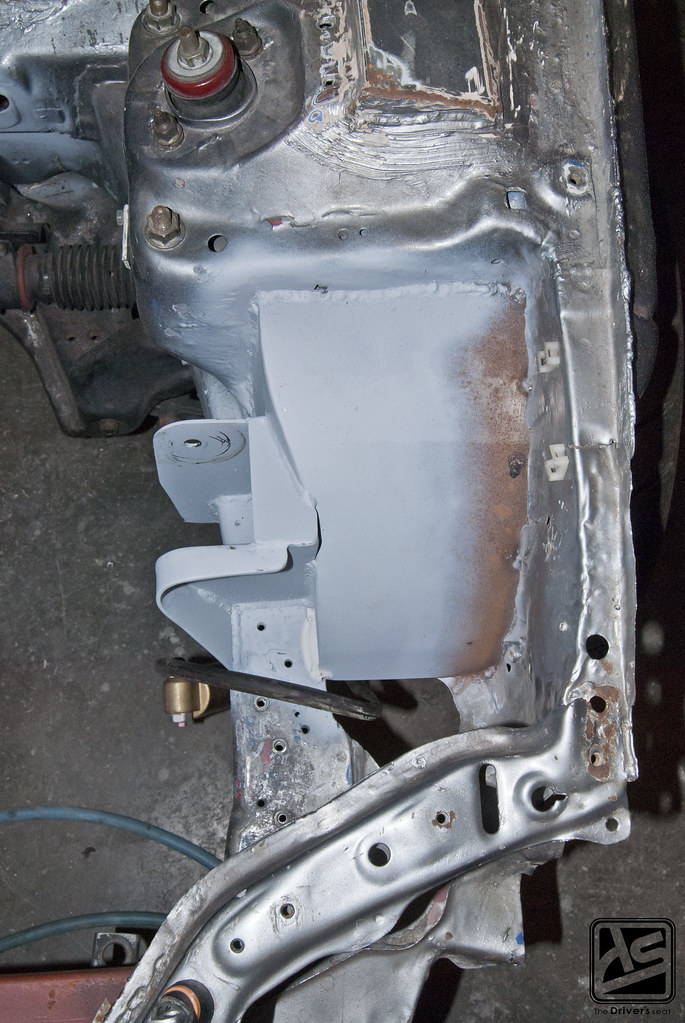 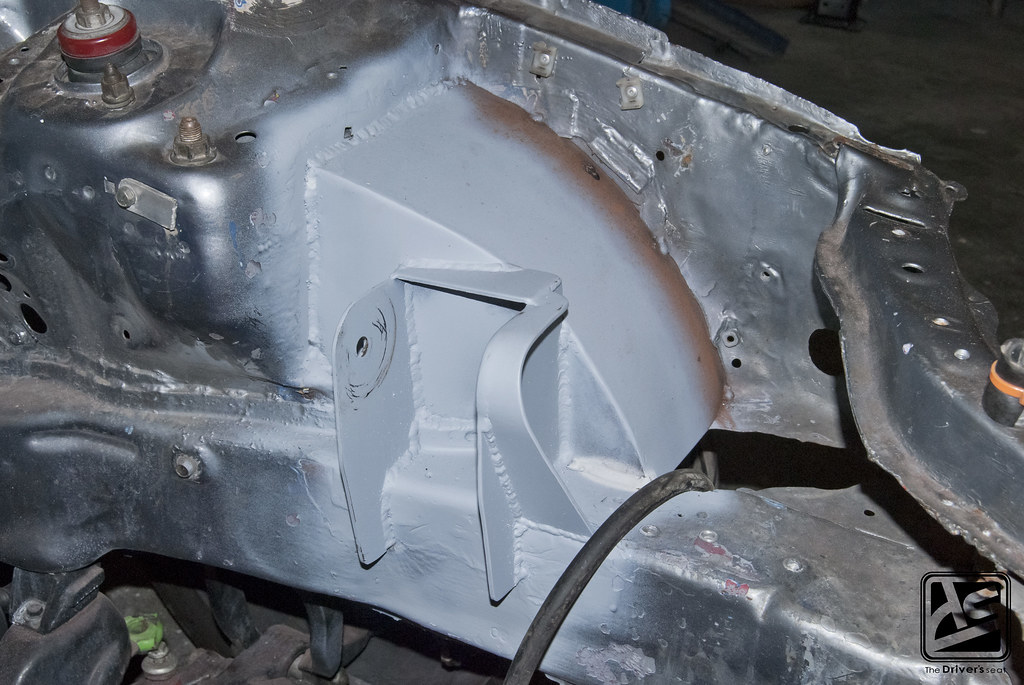 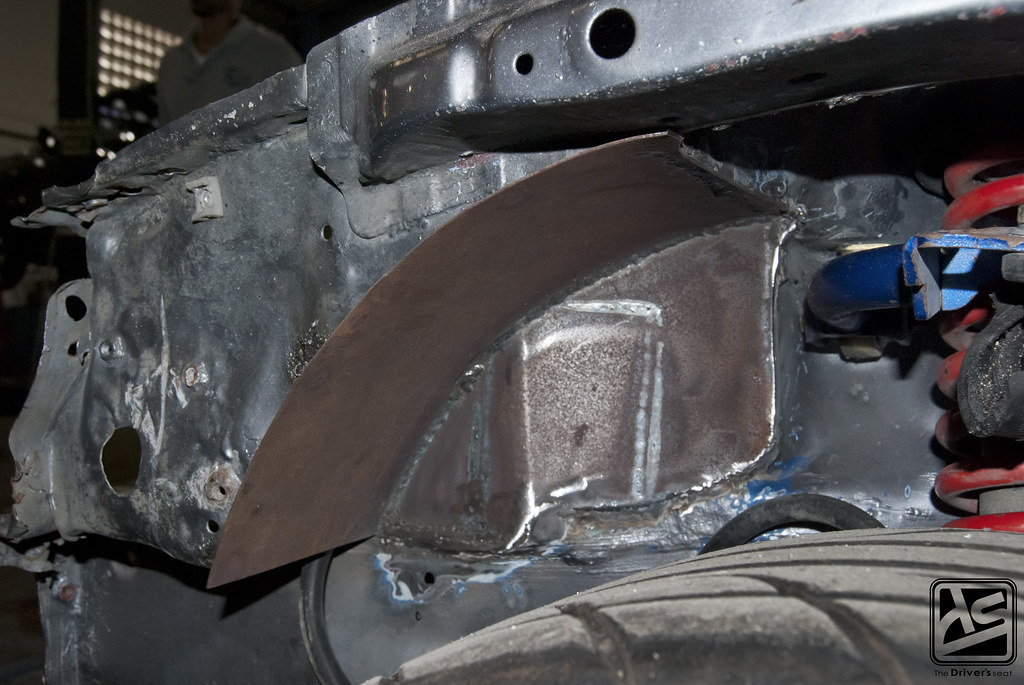 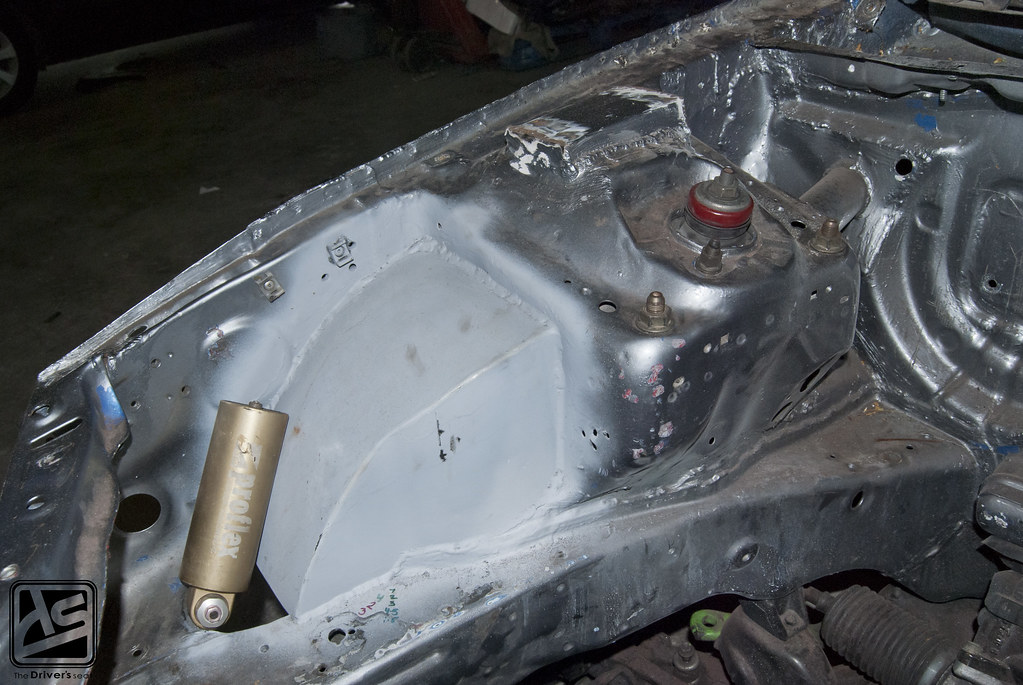 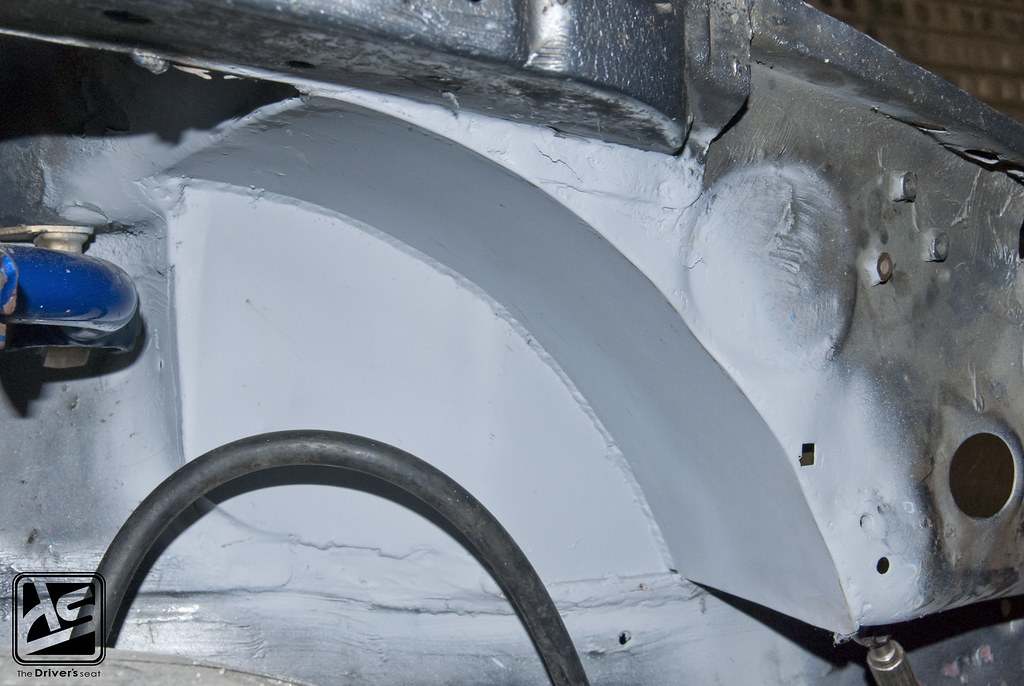 A look at the right side from above and below… 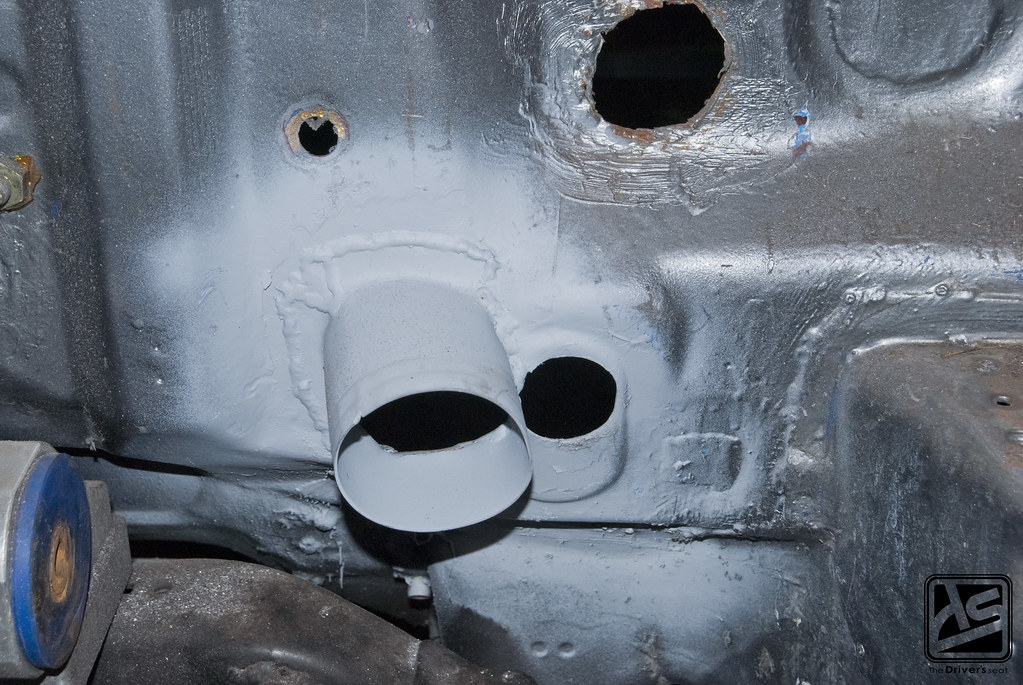 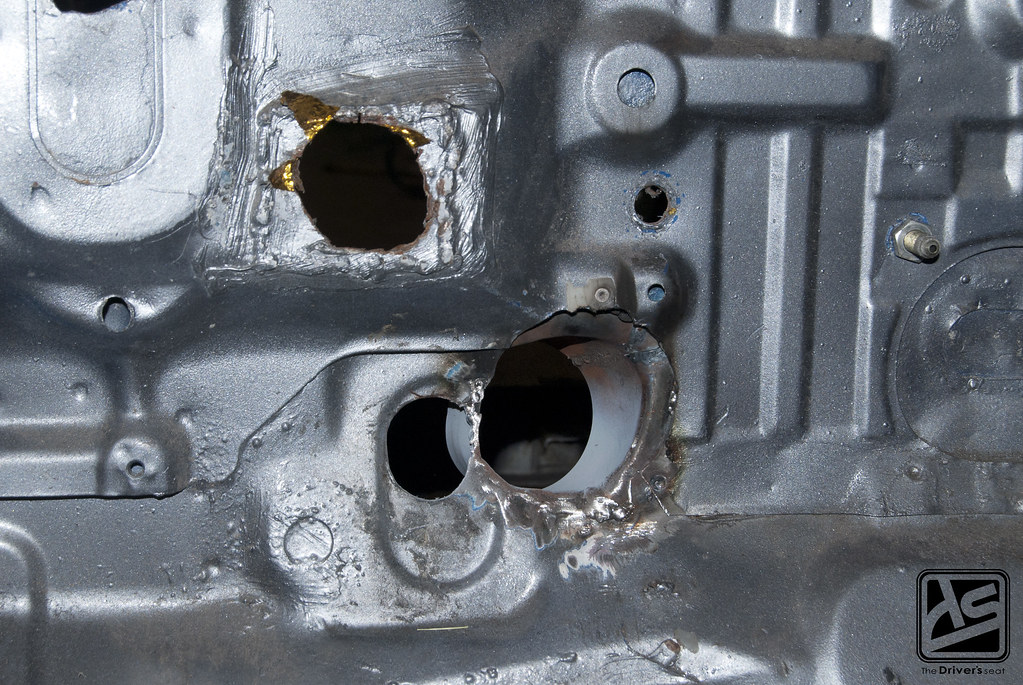 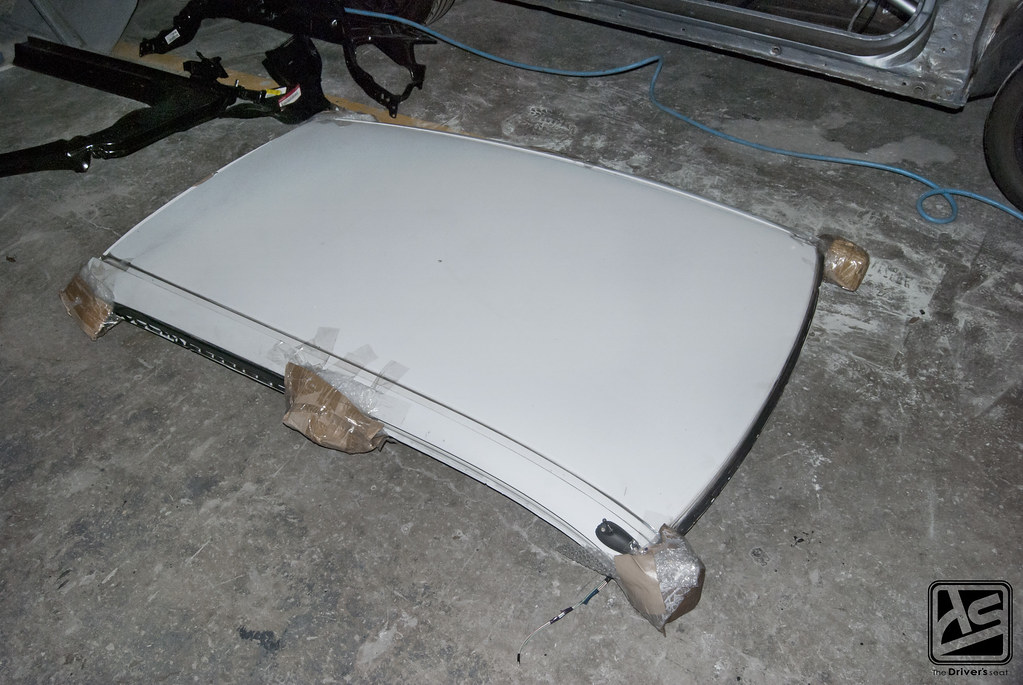 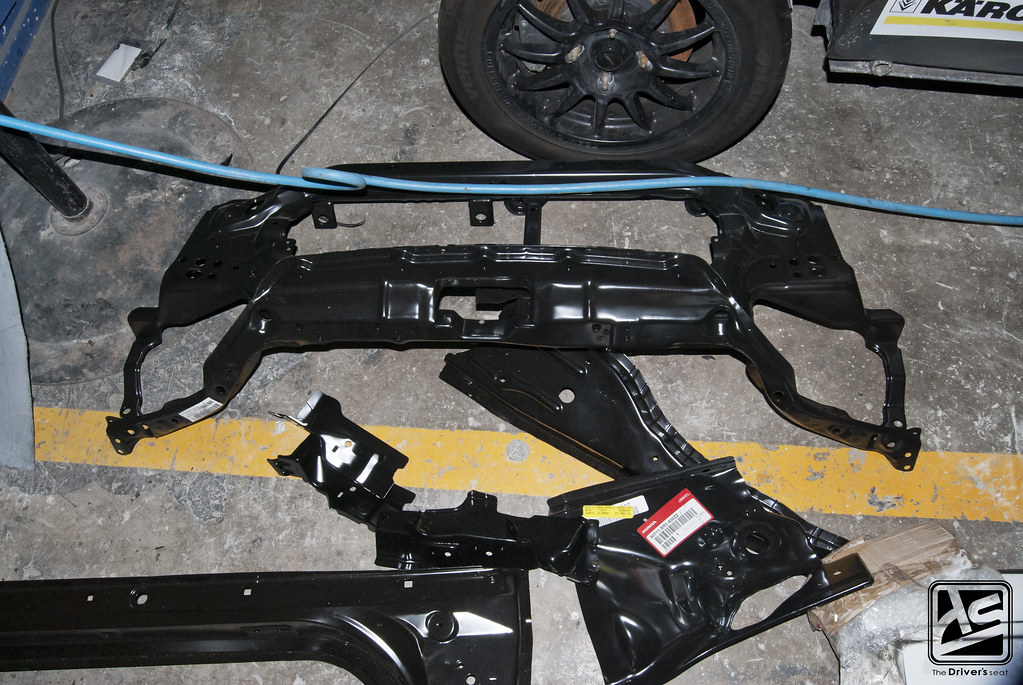 Rather than try to repair the damaged panels and supports, new replacements were sourced.

And on that note, I will end today’s post here. Thanks for taking a look and stay tuned in the next few days, I have some new projects to drop.