Some of you can’t seem to get enough of Sol’s many projects, and today I have another build from within his rather spacious stable. We’ll be taking a look at one of his first major builds, or what he would refer to as one of the more treasured cars he owns.

The AE86 rightfully speaking is a legend in every true car enthusiast’s mind, including Sol’s. That was exactly why he chose this platform to make his first step into the performance world. To fully understand why this particular AE86 is held so high on his list of prized cars within his garage, you must first understand the story behind it.

Sol purchased this car at the age of 17, the car still had the original 2T engine, and the first mods that were made, were to cut the springs and lower it on some 14″ wheels after welding the diff. Basically falling in the foot steps of the typical ricer. After having some fun with his recently acquired toy, he realized it lacked power and made it the sole thing to be dealt with on the to do list. Soon after a supercharged 4A-GZE motor with T50 gearbox would find its way into AE86 body. As the fun increased, Sol would once again have a thirst for more power than the supercharged motor was able to deliver. Based on natural progression, he would enter the turbocharged world and never look back. The motor was torn apart and rebuilt to handle the boost pressure generated from the GT28 turbo. However, after heading down this road, the car would never last long enough for Sol to truly enjoy it as he did while it was supercharged. Fed up and not motivated to continue down this path, the car would return home and be placed in storage awaiting some form of inspiration to finish the project.

Even though it has been off the road for quite some time, throughout all the other projects that came and went, Sol has always had a plan in mind for the AE86. This was the car that really got him started in the performance world, and gave him some insight on modifying in order to reach a desired end goal. 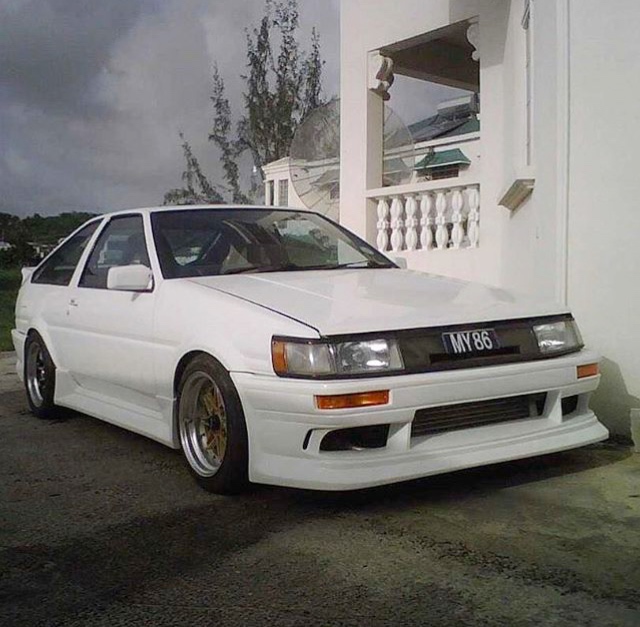 This is probably the only clean photo that still exist of the car in its prime, fitted with an original Origin body kit and a set of Work Equip 03 wheels… The car as it sat, untouched for quite some time while Sol was busy dealing with his other projects… Most of the original interior plastics still remain, its only a matter of fitting them back together… After the Cusco roll cage was bolted in place, no further progress was made with the interior… A glance inside where you can see the partially disassembled interior…with bits of the factory panels scattered around…. Taking a look towards the front of the AE86 Chassis,  you set your eyes on something that doesn’t quite belong… You aren’t mistaken, the chassis was on its way to having a Sr20 DET conversion straight from a S15 Silvia… Sol felt inspired and made an attempt to stuff a SR20DET motor in the bay. However, during that process he lost interest and the car would sit for a few years… Close up of the JSP Fabrications manifold… Close up of the Work Equip 03 wheel… Full front view; Origin front bumper neatly rested up against the front end with the headlights and grille removed… That was a first look at Sol’s AE86 Build, be sure to keep your eyes open for more to come on this build in the upcoming weeks.