Robert has been around the automotive scene for a long time. Over the years he has been responsible for numerous high quality builds with an equal level of performance to match. What stands out the most is his recipe for success with regards to the Mitsubishi Evolution platform. You can be almost certain as long as he is affiliated results are sure to follow; an example could be seen with Corey’s CJ4A Build which did a time of 7.4 secs in the 1/8 mile on its first time out. In terms of his personal success, his previous Evolution VII build was one of the first street cars to drop into the 10 second bracket in the 1/4 mile with a time of 10.420 secs at his first event. Another can be found with his most recent build, an Evolution V which laid down a time of 6.827 secs in the 1/8 of mile also on its first outing. Enough about the man behind the build…

Today I’ll be bringing you guys a first look at a collaborative effort between Jostech & RB Performance. Both Jimmy and Robert got together and came up with the idea to build a dedicated drag project. Not having a purpose built drag strip locally, the car would need to be 4WD to aid with getting the power to the ground efficiently. The easiest platform within their grasp would be be a Mitsubishi Evolution. With Robert already having a vast knowledge base in this area; it was the most sensible choice. This would also be a great opportunity for him to fully push the limit to extract as much as he possibly could without having to worry about the struggles associated with a street build. The chassis chosen for this project will be a CT9A Evolution VII.

The inspiration behind the concept for the car was taken from several international builds. The long term goal of the car is to run high 8s or low 9s in the 1/4 mile with hopefully the promise to travel throughout the region with the car. The timeline on this build is a mere 20 days, the idea is to have the car completed in time to compete in the upcoming 1/8 mile B.A.D.D Drag Warz event. The guys have quite a challenge on their hands in the few weeks to come.

For most this would be a tough pill to swallow building a car from the ground up but with a deadline set to complete the build, the guys will be using the event as a shakedown for the car. Based on previous experience, the plan is to try to eliminate as many issues as possible associated with a new build and lay down a time to see where they are at. Hoping to progress from there and work towards attaining their end goal.

We will be taking a look at the build today from the very beginning when the guys first got their hands on the car and working our way through the tear down process as the shell is prepared and also as some of the parts as they started to arrive. I hope you guys enjoy….

The guys wanted to make it a point to list the major people that will be involved with the build and their roles :-

Shortly after the guys were in possession of the car… 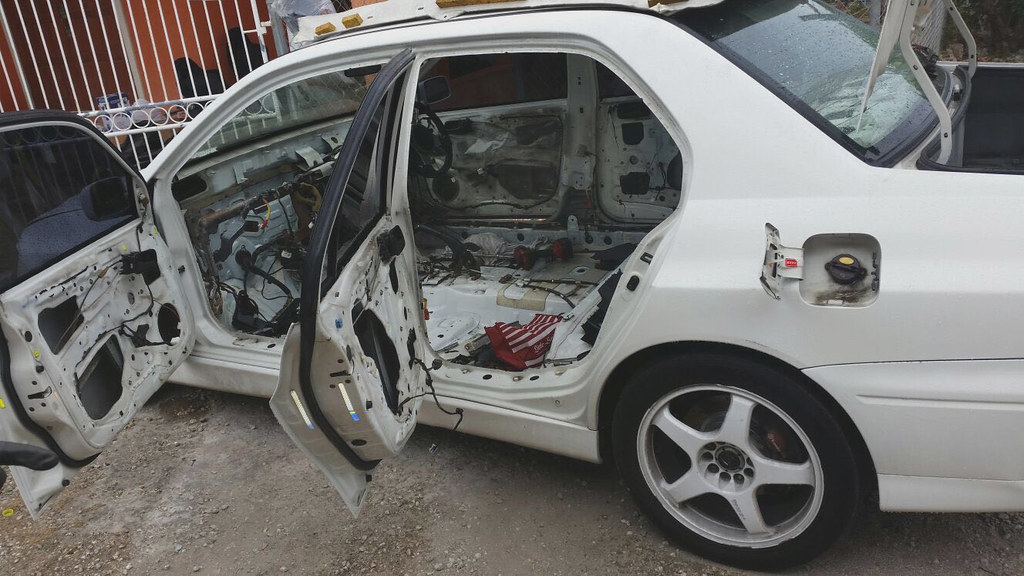 Being by it’s a purpose built drag car there was no need to retain the sound deadening. Neither was there a reason for the dashboard to remain… The standard Evolution VII brakes will only allow for a minimum of a 17″ wheel; the guys wanted to utilized all of the traction at their disposal and had a plan to run 15″ wheels. For this to be possible they would have to remove the factory Brembos in search of a smaller brake kit to accommodate the smaller wheels… 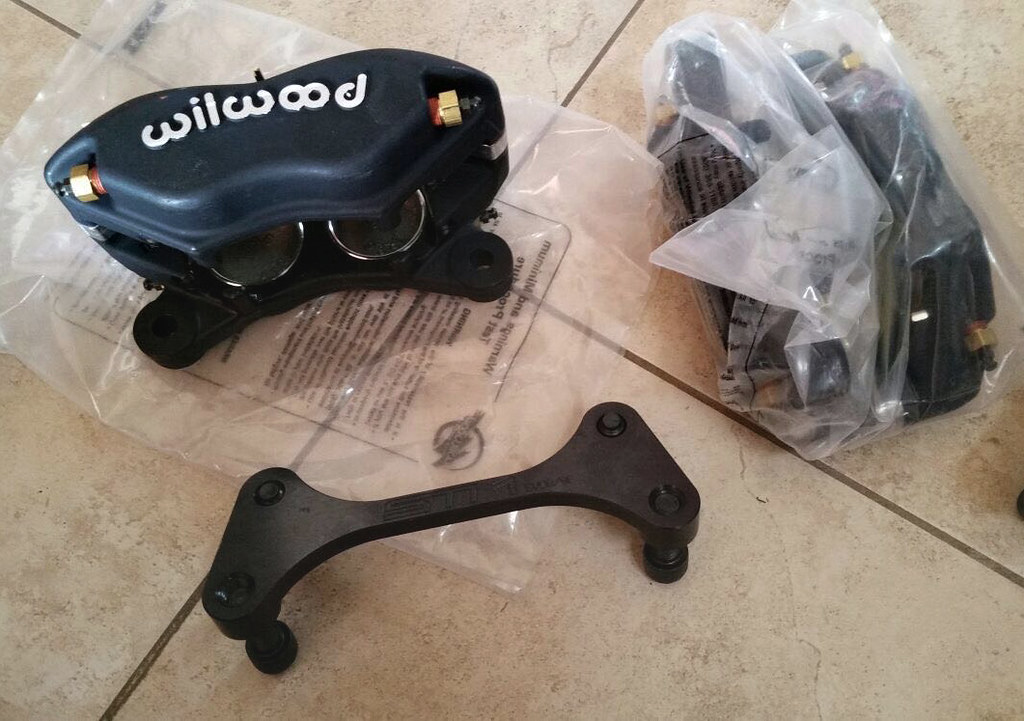 STM drag brake kits allow for the use of 15″ wheels while shedding some serious weight in the process. The kit includes Wilwood calipers and a lightweight scalloped rotor with a custom STM aluminum mounting bracket. An example of the weight savings can be seen on the front kit weighing in at a mere 11.7 lbs whereas the standard Evo VII brakes tip the scales at 39.8 lbs more per side. On the rear the entire assembly weighs in at 8.70 lbs where as the stock Evo VII rear rotor alone weighs 14.6 lbs. So its clear this was a step in the right direction as we know less rotating mass is one of the best ways to free up some power. In drag racing every split second adds up and when it comes to finding the perfect launch, the suspension you choose can make a drastic difference in your E.T. After doing the necessary research, the guys were able to settle on a set of STM Spec D2 drag racing coilovers. In an effort to be as efficient as possible while keeping an eye on the scale, a koyo half core radiator will be used… Flex-a-lite electric fans not only move large volumes of air, but also are perfect when used in confined spaces due to its compact design. Making this the ideal for the setup the guys have in mind…

As the parts started to pile up, it was time for the next phase in development for the CT9A chassis… The beginning stages of work being done on the roll cage… 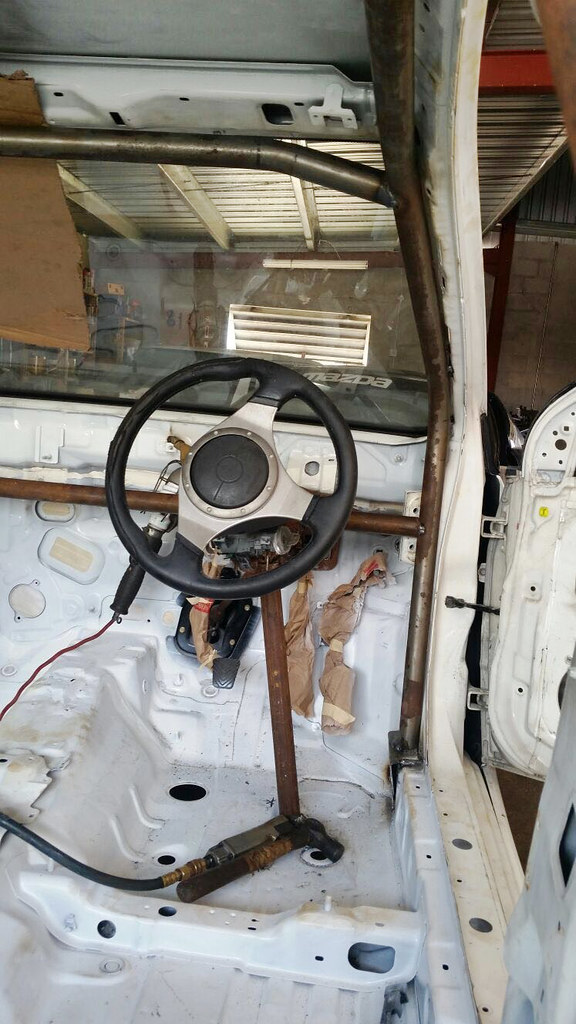 A few shots of the welding process… A quick look showing the majority of the work completed.. The last and final piece going in… The table where the magic happens, cleaned and cleared ready to being work on the engine build. Unfortunately that is all for today’s post but be sure to find more on this build in the upcoming days.