Sticking with my plan of bringing worthy posts for you automotive junkies, I have something special for you. In recent years, the Evo movement has increased significantly in Barbados, with a rapid rise of Evo VII, VIII and IX projects coming out the woodwork. Some guys have taken it further, and several FWD 4G63 builds have come to light. Despite these builds, a select few have gone beyond this point and have performed full 4WD conversions into lighter nimbler shells. Today, I have an inside look at one of the more extreme builds that the island has seen so far. Corey’s custom widebody CJ4A Colt build. Ironically enough, the owner Corey Stanford already has an ongoing project on the site.

Now some of you may be wondering why, but for Corey it’s something which has been on his mind for a while. First understand, that he previously owned a Subaru STi Spec C for a few years, so he definitely is no stranger to piloting a 4WD machine. Recently a few things changed for him, allowing the opportunity to re-emerge in the 4WD world. Even though Corey previously owned a Subaru, he felt as though it would be a step backwards with the necessary modifications and budget needed to match the performance level of lesser modified Evos. So three diamonds appeared to be the obvious choice but the problem was that Corey didn’t want an Evo. This is where things started to get interesting, as he would prefer the performance and reliability of having an Evo minus actually owning one. It was at this point the decision to build his own came into play; after all, why follow the grain when you can just go against it and make a much stronger impact with lots of satisfaction along the way.

With that in mind, he set out to do just that, first up was finding a shell for the conversion. While doing some research, he realized that it was relatively easy to do a full 4WD conversion into a Colt as some were 4WD from the factory. As simple as the conversion is, finding a shell was a bit more challenging. Corey eventually was able to find one but unfortunately it was missing a few necessary pieces. Looking at the pros and cons of this he decided against the 4WD shell and went with a FWD shell he found tucked away in storage. The differences were minimal with the exception of the gas tank which needed to be changed and the fabrication of the exhaust but already being experienced in welding, this was a walk in the park for Corey.

To perform the swap all Corey needed in addition to the gas tank was an Evo 4 front and rear suspension, gearbox, transfer case and differential. 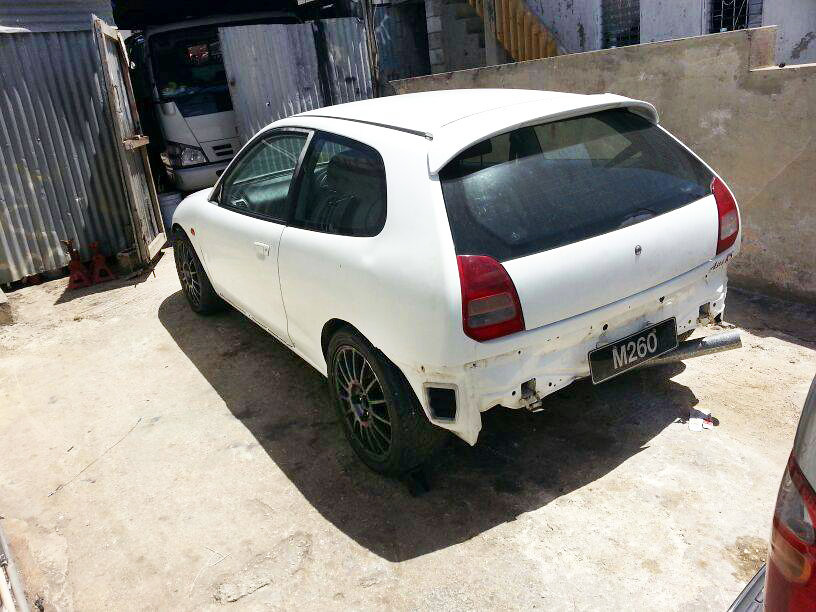 Corey put plans in place to move forward with the FWD shell and quickly collected the necessary parts needed to perform the swap. What happened next was quite amazing, the time between bringing the shell home and the first drive was done in only a matter of 14 days. 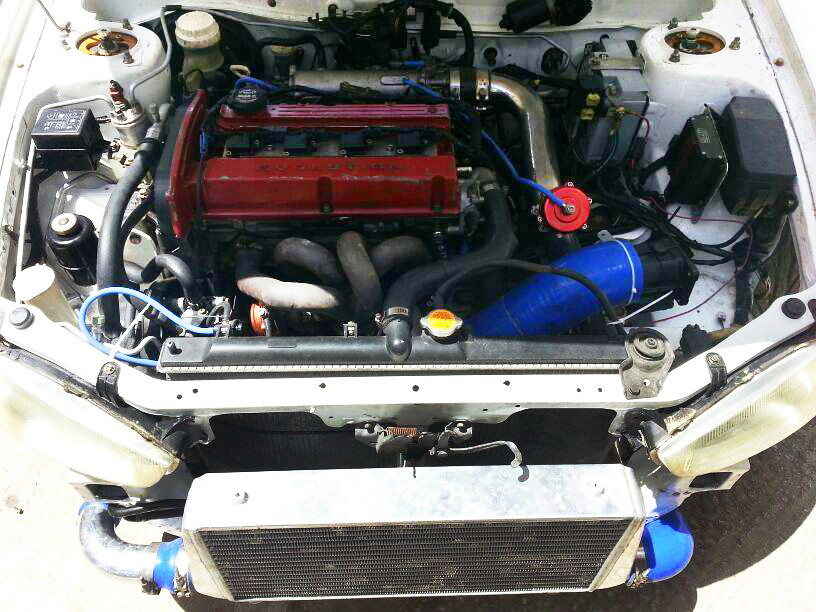 Taking a look under the hood, Corey went with a fully built 4G64 motor built by none other than Robert Bishop, utilizing a GT35 turbo and a straight 3″ exhaust. 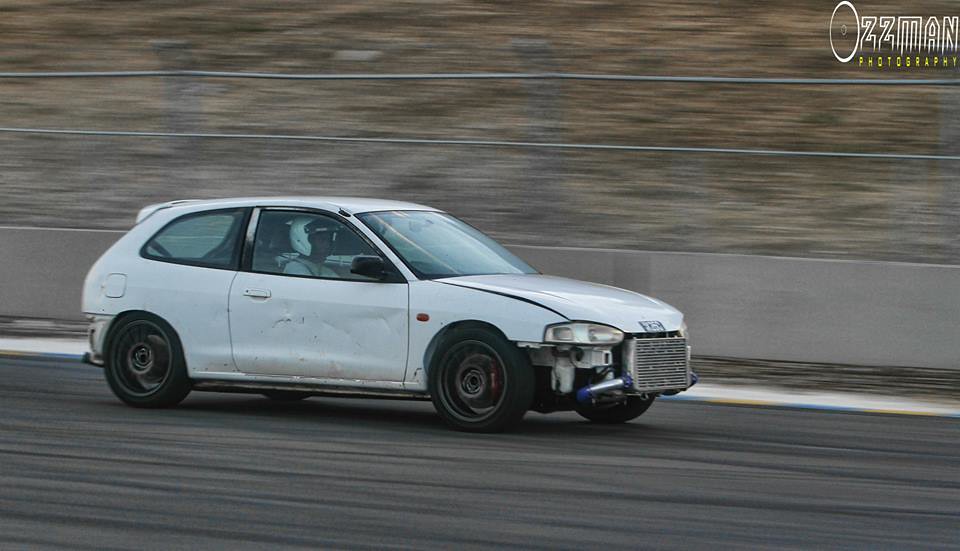 Being a member of Barbados Association of Dragsters and Drifters B.A.D.D, Corey took the car up for the 1/8 mile and the results for a first drive were pretty impressive, he recorded a best time of 7.4secs. With the car being assembled in such a short space of time, the bare essentials were installed. Not only the lack of bumpers and side skirts but along with this, the gauge cluster had not been connected as yet and Corey was merely shifting by ear when he drove.

After the drag event went by, Corey being as impressed as he was, wanted to take things to the next level. The initial goal of this build was to produce something above and beyond the average Colt. With this in mind the car was then sent to Danny and between him and Corey came up with a new concept for the car based off two other Colt builds Corey followed. 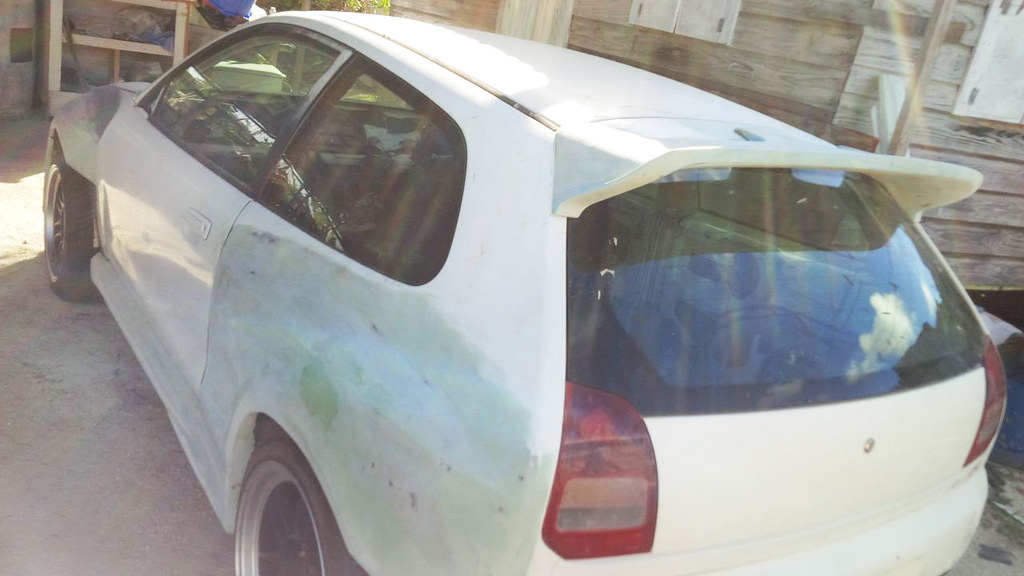 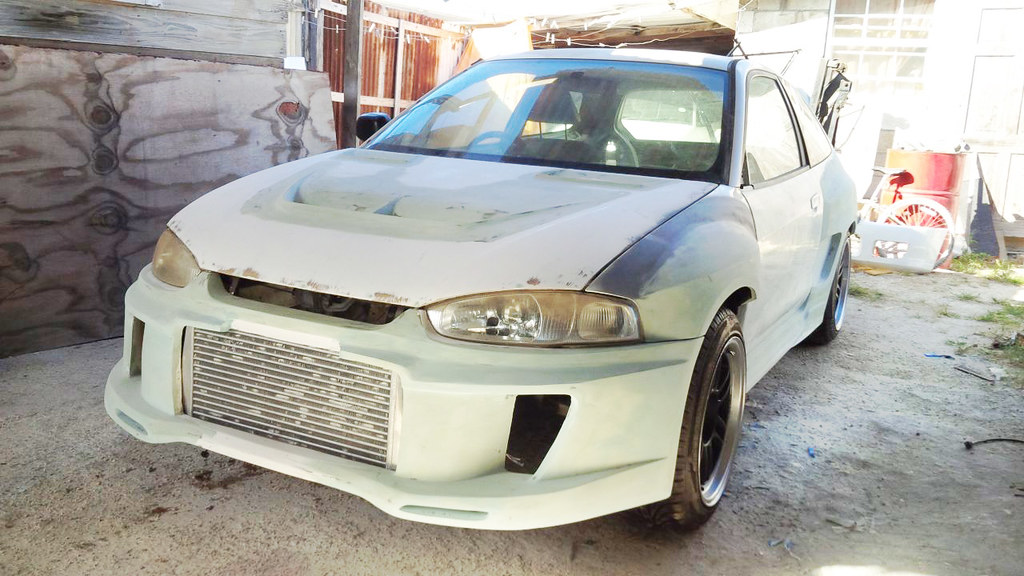 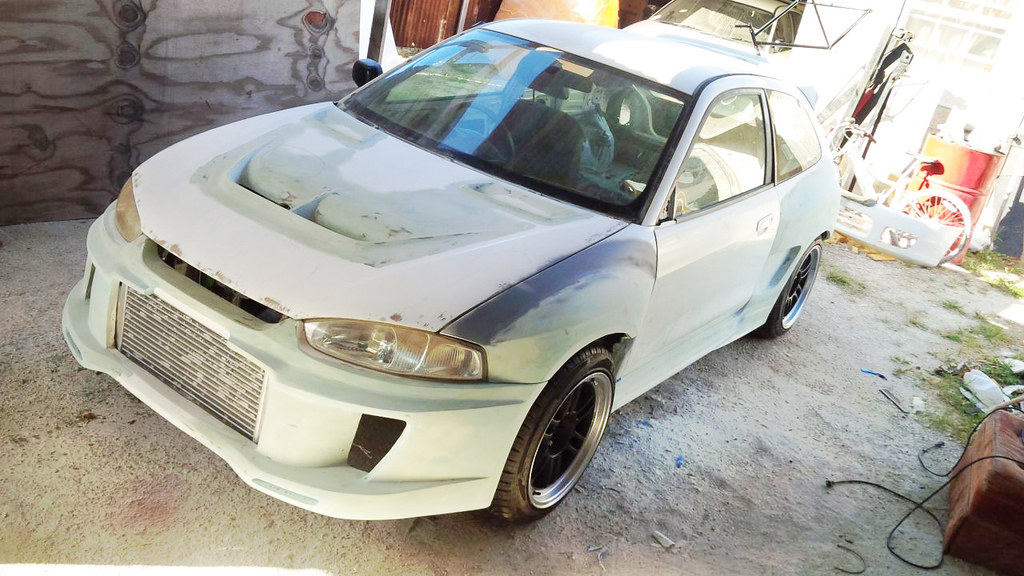 Once the idea came to life there was nothing basic about it or even anywhere close. The widebody kit brought the car to be 4″ wider than a stock body Colt. Along with the widebody kit a one off front bumper was fabricated with a large opening to ensure the intercooler gets the necessary air it needs along with two vents on either side which the usage is still to be decided upon as they both can be multi purpose. 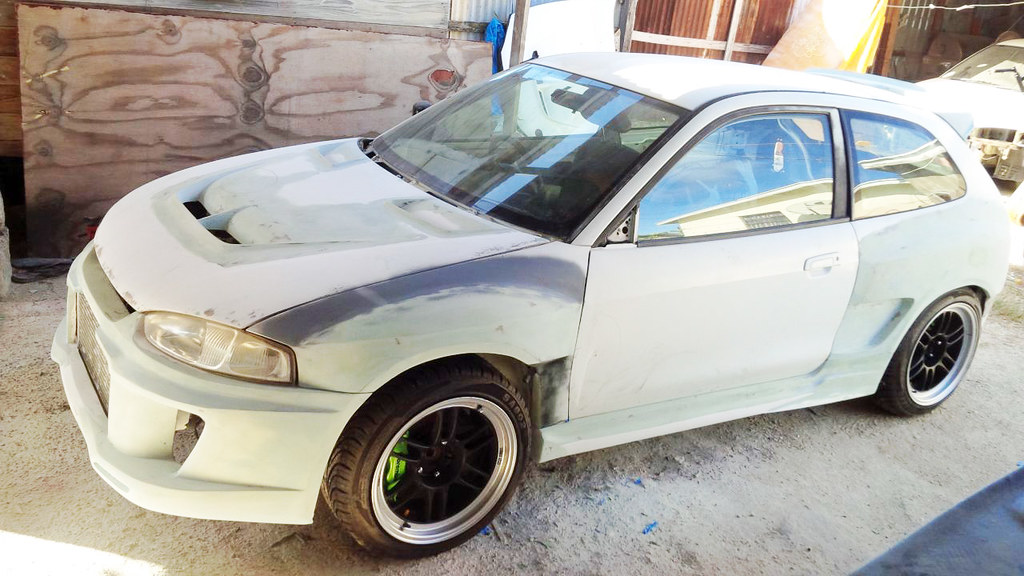 After the car retuned home from the paint, there was a buzz going around about the color choice which Corey made. This was one of the many decisions throughout this build made by his partner. As a matter of fact, most of the choices thus far for this build have been her ideas which Corey put into motion. Unlike his AE86 build, this one will be more streetable, and Corey plans to retain all the typical creature comforts, such as a full interior, AC and PS. Even with this very unique color choice, the car looks very menacing even from the rear. A custom made diffuser was fitted to accentuate the look of aggression even more and was painted in a gloss black to add some contrast… Moving on to one of my favorite pieces of this build, the custom made rear spoiler now in its completed state, which in my books was executed flawlessly. A quick side profile… Every part of the exterior was addressed in this phase, Corey recently acquired these mirrors which were also painted in black to aid with the contrast of things… A view of the front, where you see the hugh ducts to the left and right of the bumper and smack in the center the opening for the triple core intercooler which also was painted black. Corey swapped out the stock headlights and opted for a pair of lightly smoked replacements. Close up of one of the bumper vents… Not leaving anything out of the mix, Corey was not only concerned about form but also function, and made sure to install several vents inside of the fully firbreglass hood to aid with dispersing heat within the engine bay. The moment you all probably have been waiting for, but sadly no motor lies within the bay, the 2.4 motor was sold since the drag event and there is no doubt Corey will be working on something special to replace it.

I hope you guys enjoyed a first look at Corey’s latest project, be sure to look out for more on this to come.

Special thanks to Ozzman for allowing me to use his photo, you can check out his Facebook Page to view more of his work.