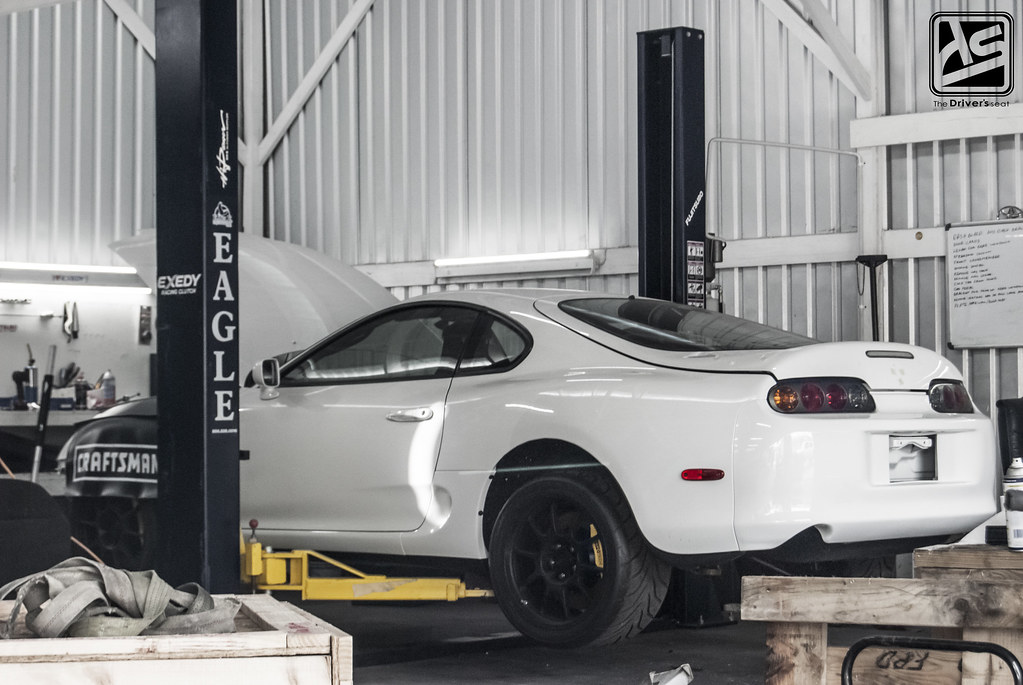 I recently received a call from Scott to let me know that when I was ready I could stop by to take some photos; I immediately made the necessary arrangements to do so. Right then and there I automatically assumed it was pertaining to the Supra. Upon arrival, I saw the Supra on the hoist and I was of the impression work was being done and this would be a great opportunity to get some photos while they worked. However, to my surprise that wasn’t the case… 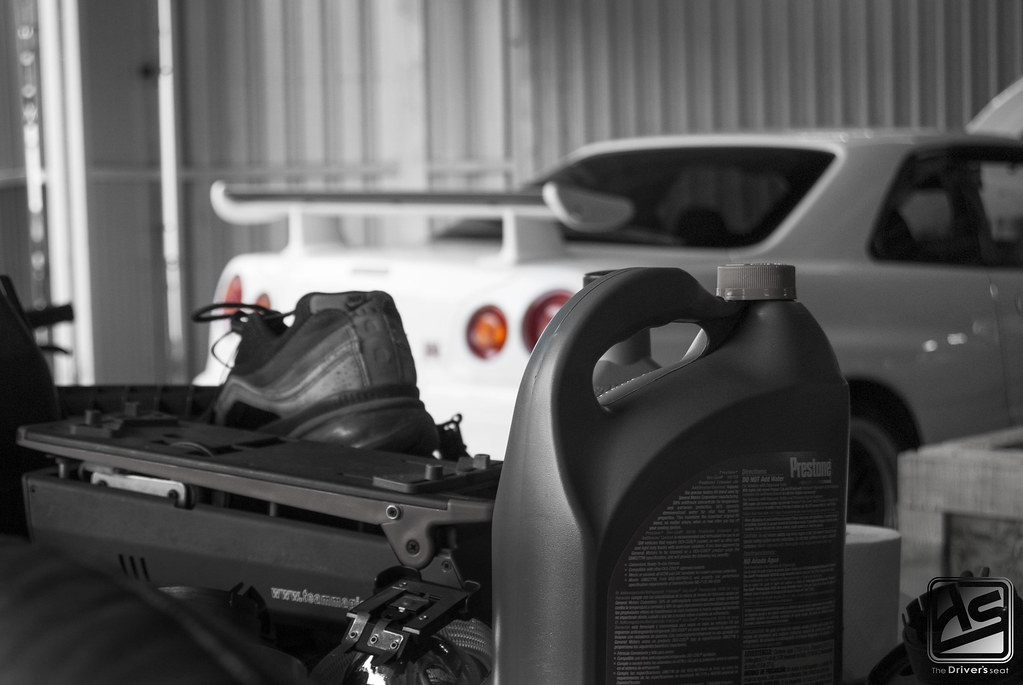 As I made my way closer to the garage, I was greeted with a set of very distinctive taillights… 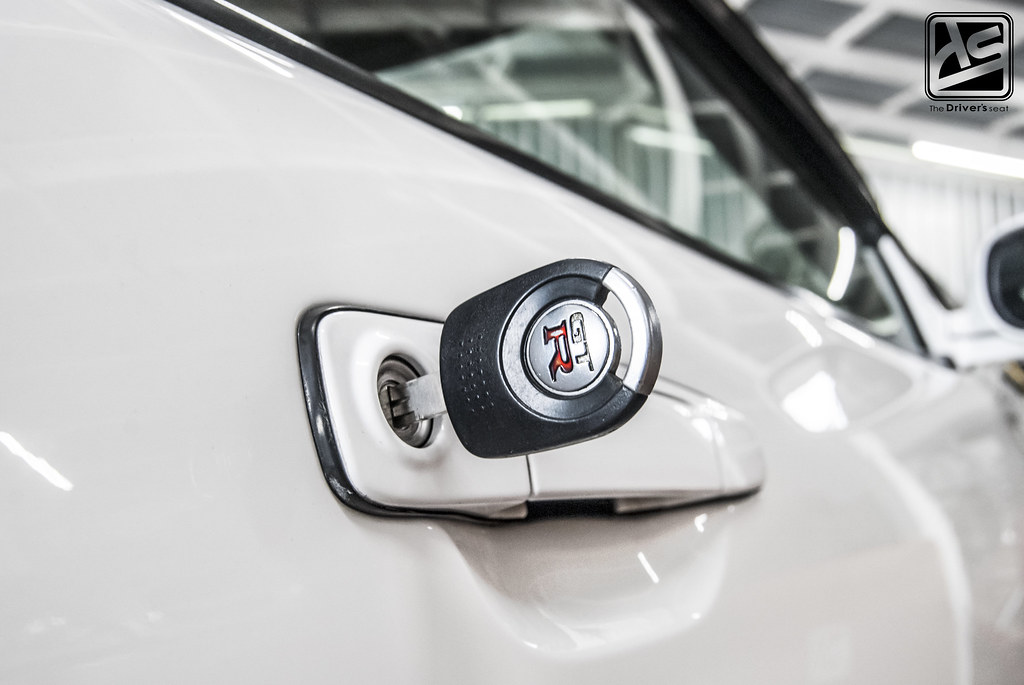 I drew closer for good measure, in case I might have been mistaken… 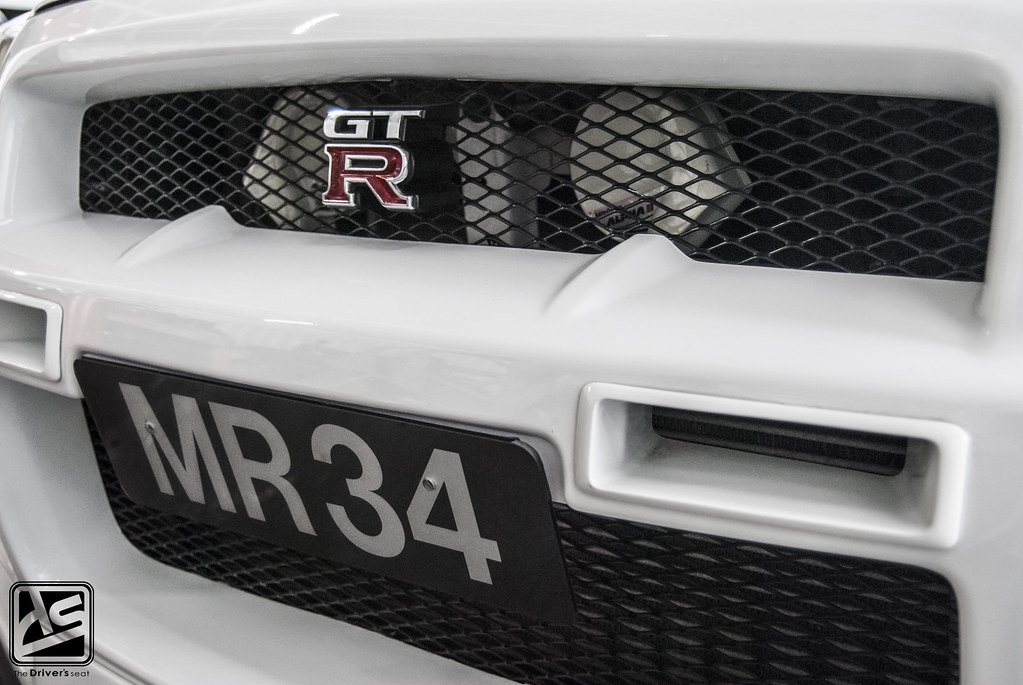 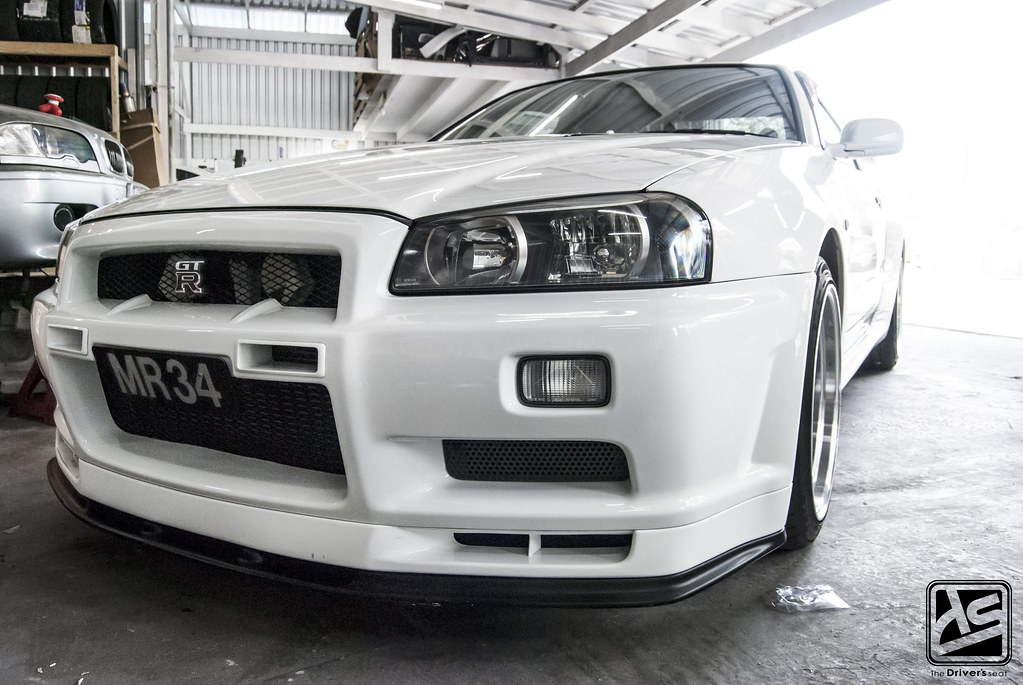 I was in the presence of one of Japan’s most iconic cars, well in this case, two of the most iconic cars, because just a few feet away was the Supra. I was literally at a complete lost for words being in the presence of what many refer to as Godzilla. The Nissan Skyline BNR34 GT-R, but this isn’t just any R34 either, this is a V-spec II which was one of the last mass produced variations made by Nissan before the production ended. 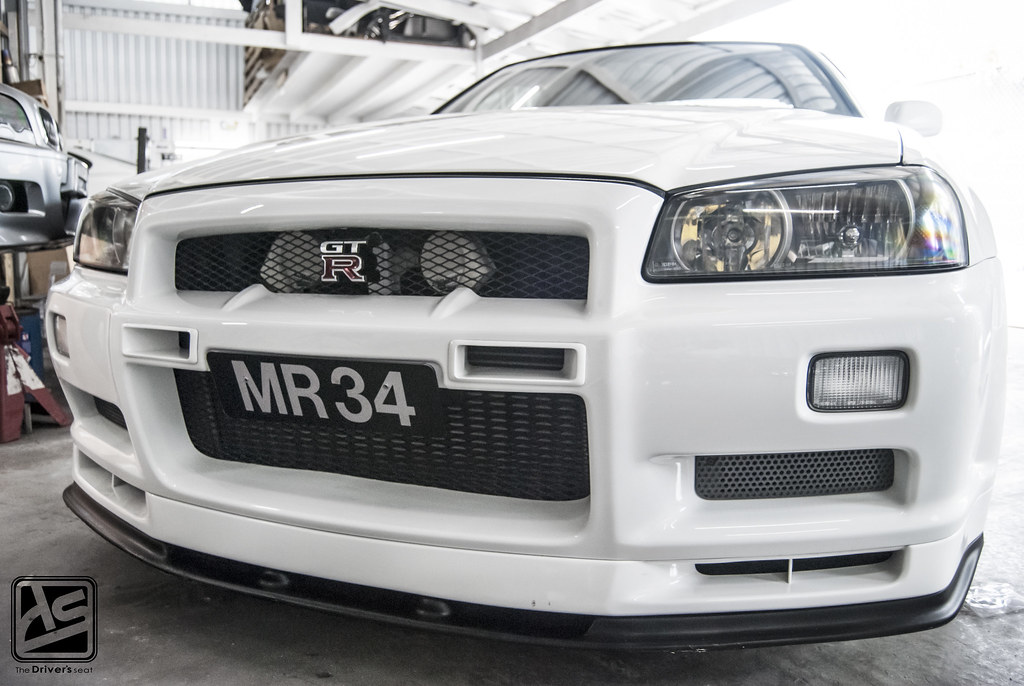 Up close and personal… 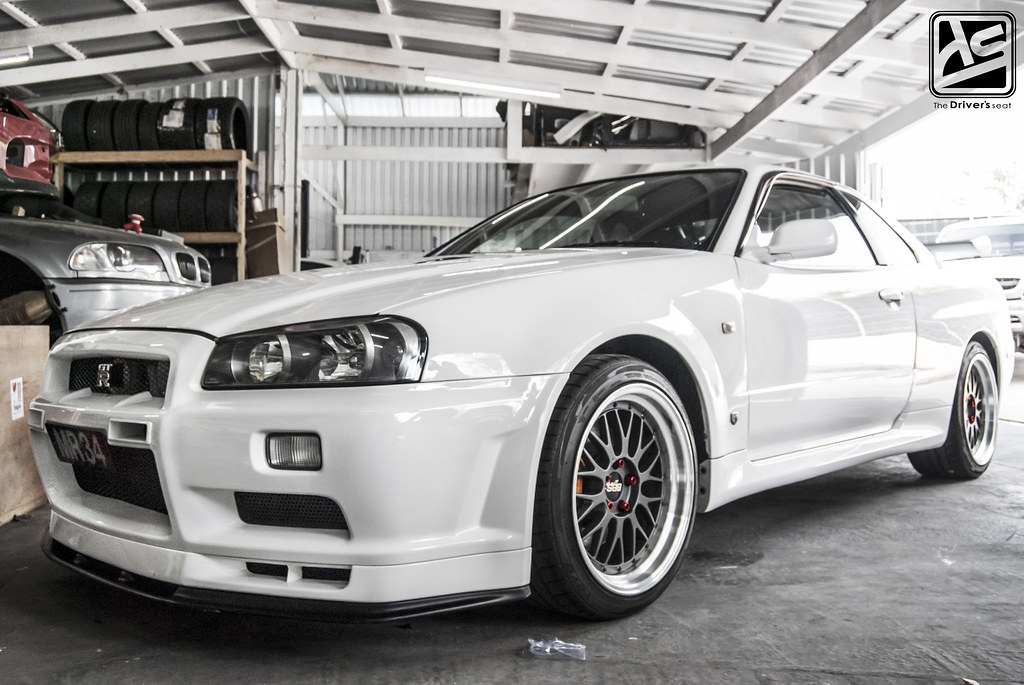 For quite some time Sol longed to own a R34, however similar to the Supra finding a clean, unmolested one at a reasonable price was quite a challenge. Somehow Sol was lucky enough to get his hands on not only a R34 GT-R, but one that is in pristine condition, inside and out. To cap it off Sol is now the second owner and the car has done very little mileage, with the odometer reading just over 19,000km.

With the addition of the GT-R, he said that this was the last and final piece needed to complete his garage. But knowing him, this may very well be subject to change. 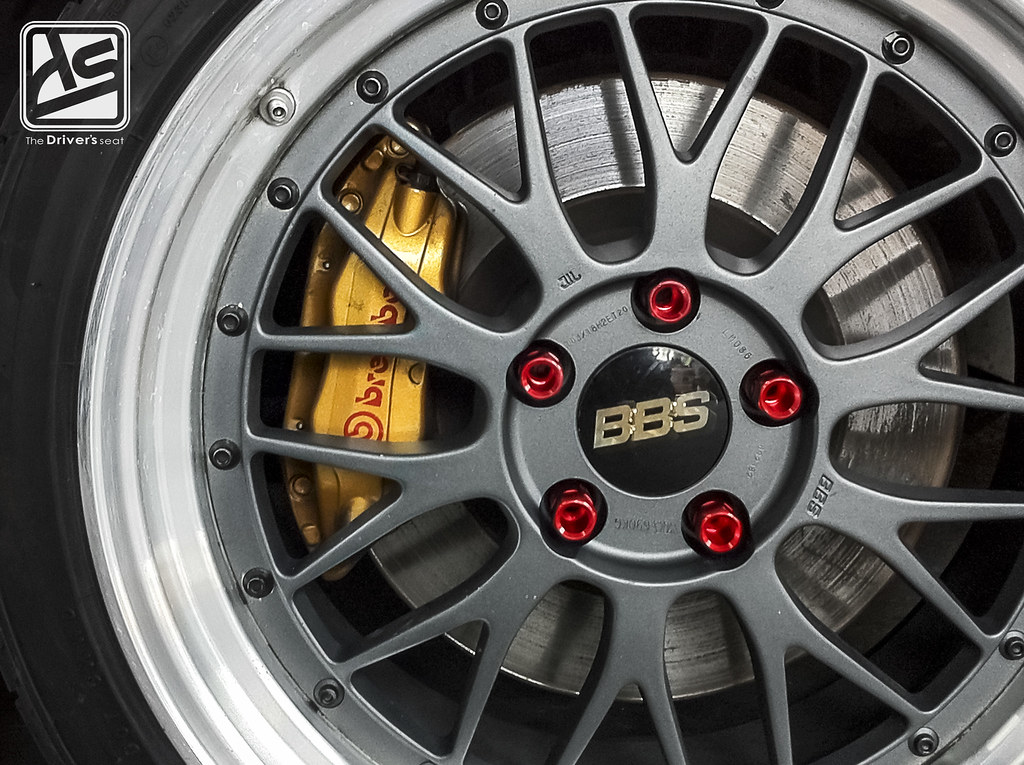 A set of BBS Wheels measuring 18 x 10 wrapped in 265/45 Toyo rubber are bolted to each corner under the massive fender arches to provide a decent contact patch with the tarmac. Similar to the Supra, the R34 came with aftermarket suspension, but in the form of HKS Hipermaxx coilovers. 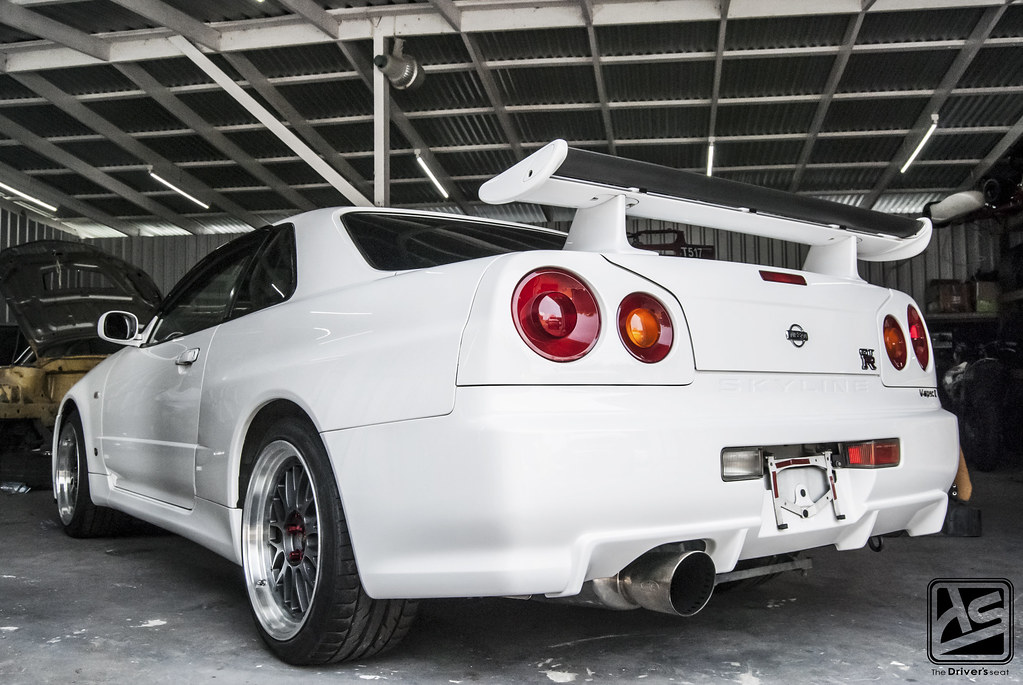 Apart from the prestige and absolute bliss of owning the only Skyline R34 GT-R on the island, Sol chose to own the R34 V-spec II because in his eyes, it is the last GT-R made that is still a driver’s car. It has a more mechanical feel to it compared to its successor the Nissan GT-R. Changing gears, breaking traction, power-sliding and tossing around a car, are all things Sol immensely enjoy doing from time to time. 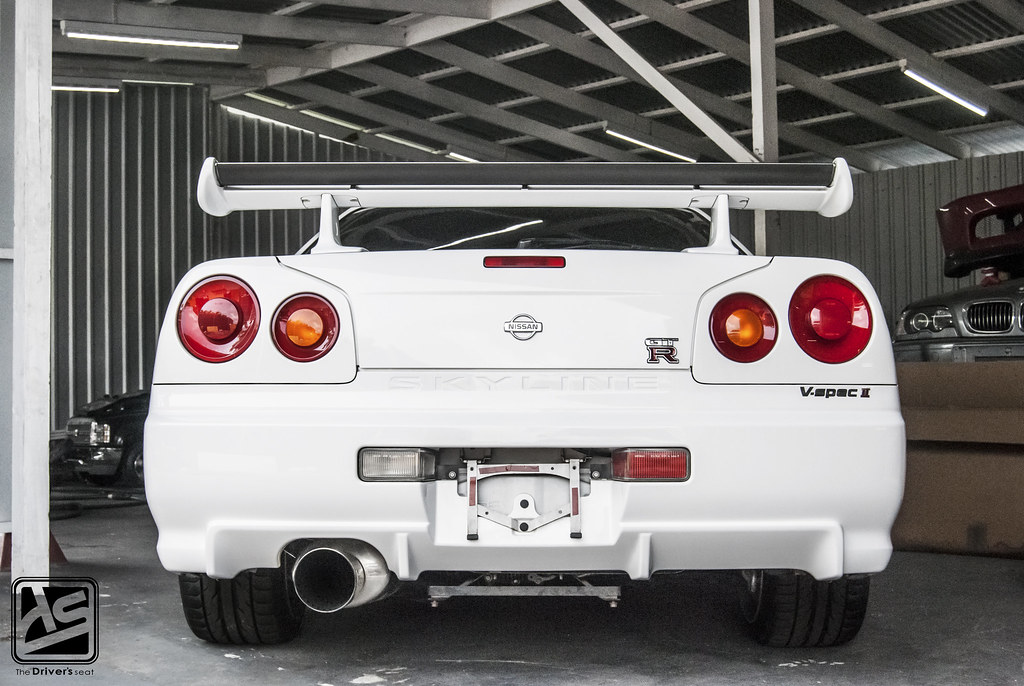 Missing in these photos is the rear carbon fibre air diffuser designed to keep air flowing smoothly under the car. Over time, rust is a common problem associated with the brackets which keep the diffuser in place. Scott removed them to have them cleaned up and powder coated before installing the diffuser. 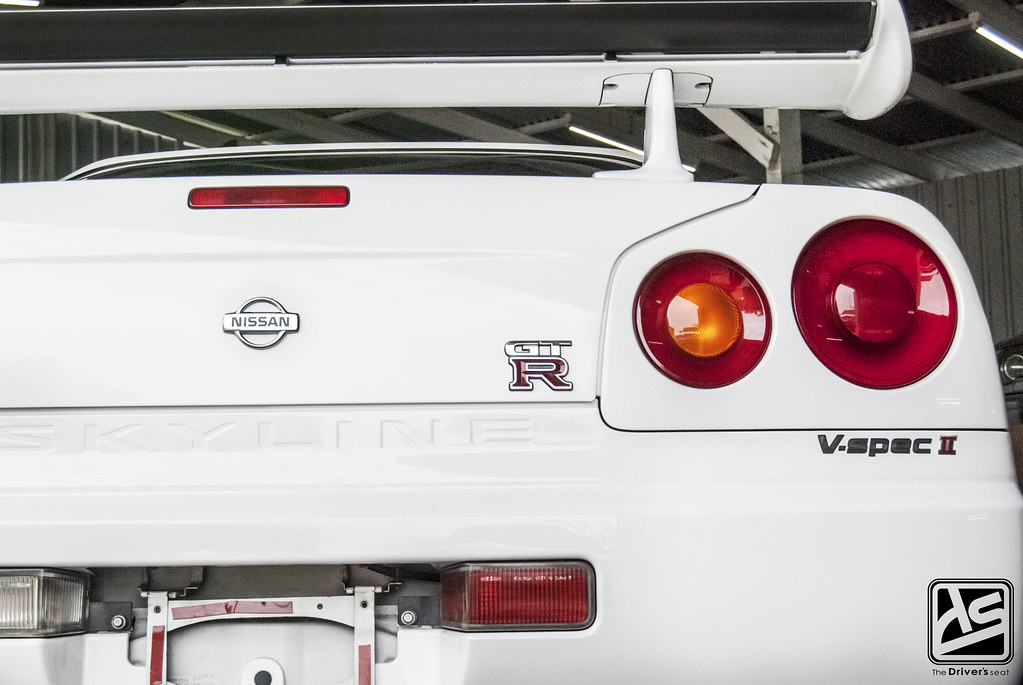 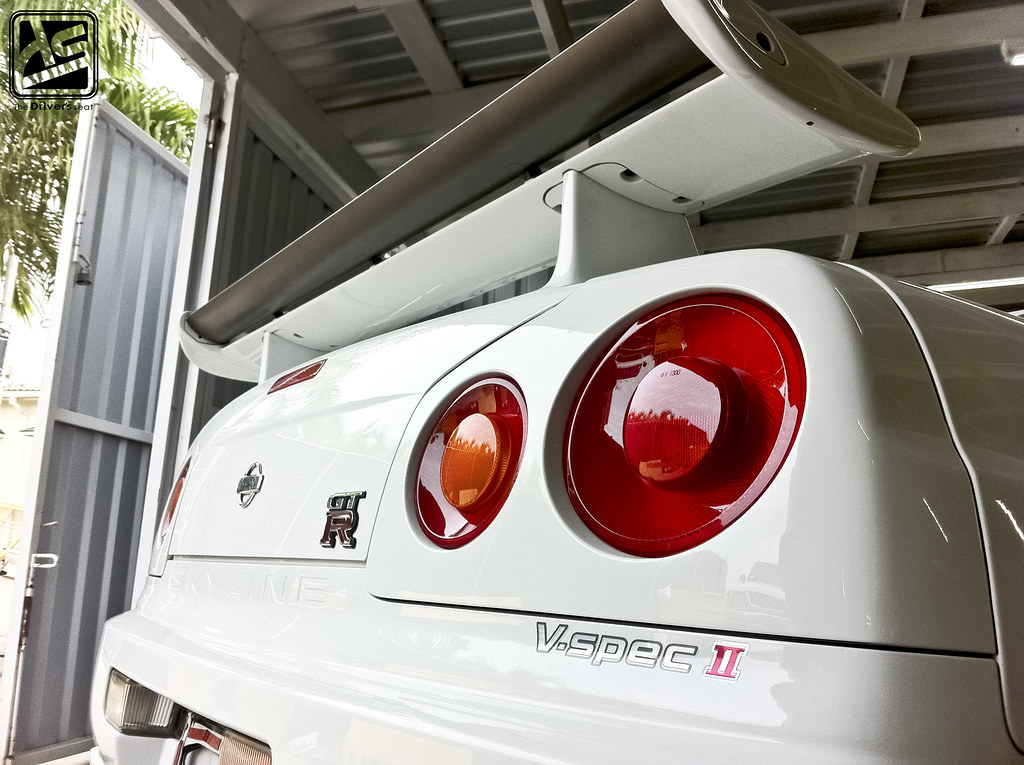 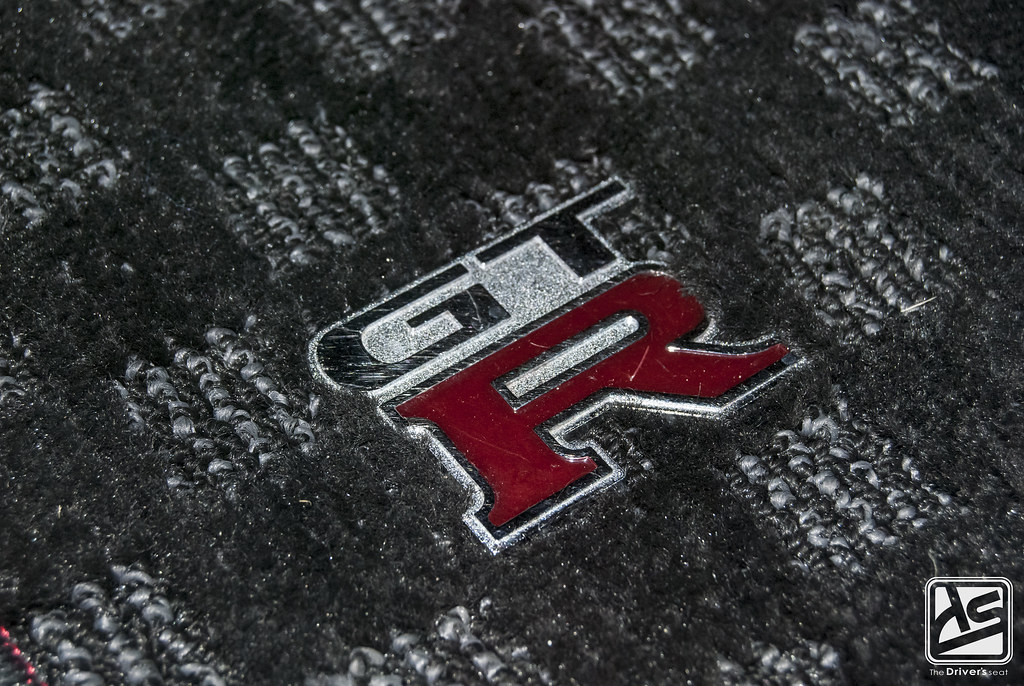 Opening either door you are greeted with GT-R mats… 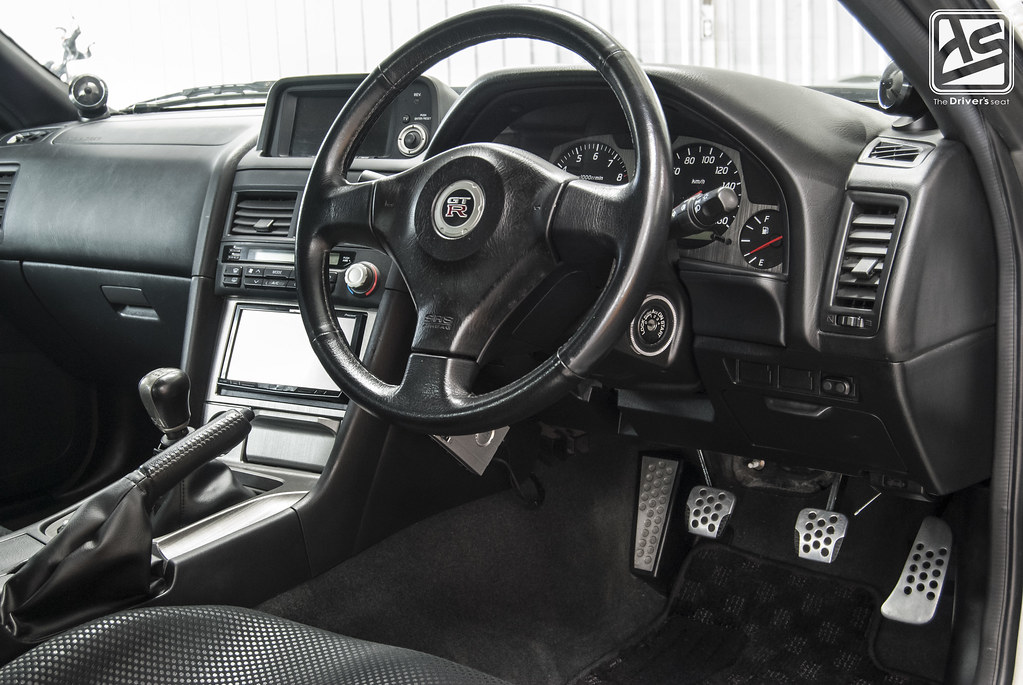 The interior on the V-spec II models featured black upholstered seats which replaced the previous gray ones, and the pedals have been upgraded to aluminum. 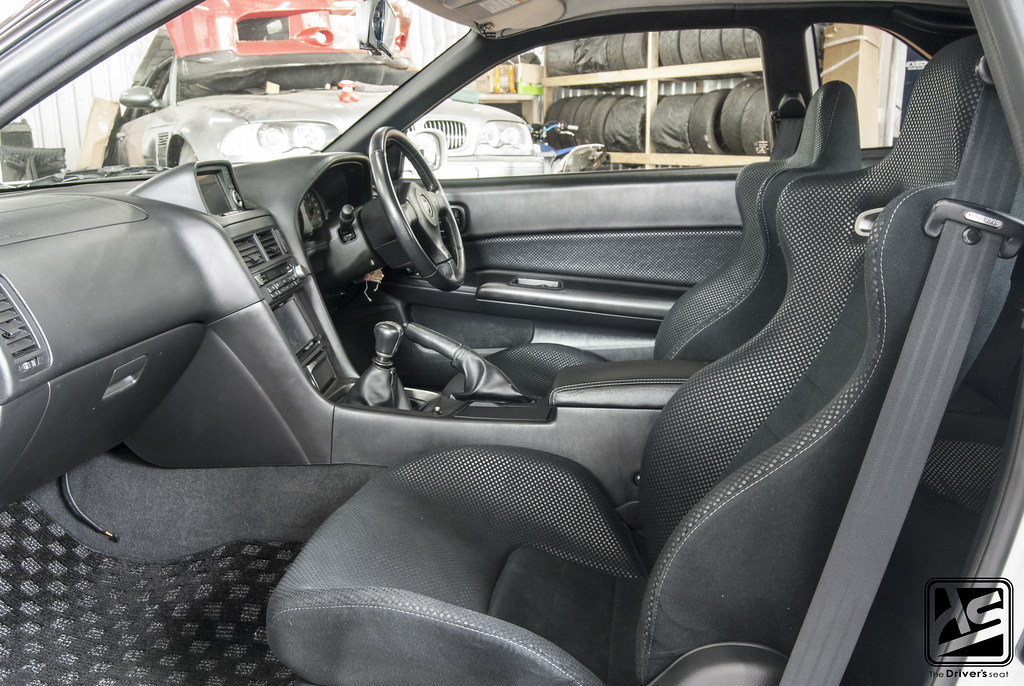 Taking a good look at the interior, you can tell that the previous owner clearly was very meticulous with the upkeep. 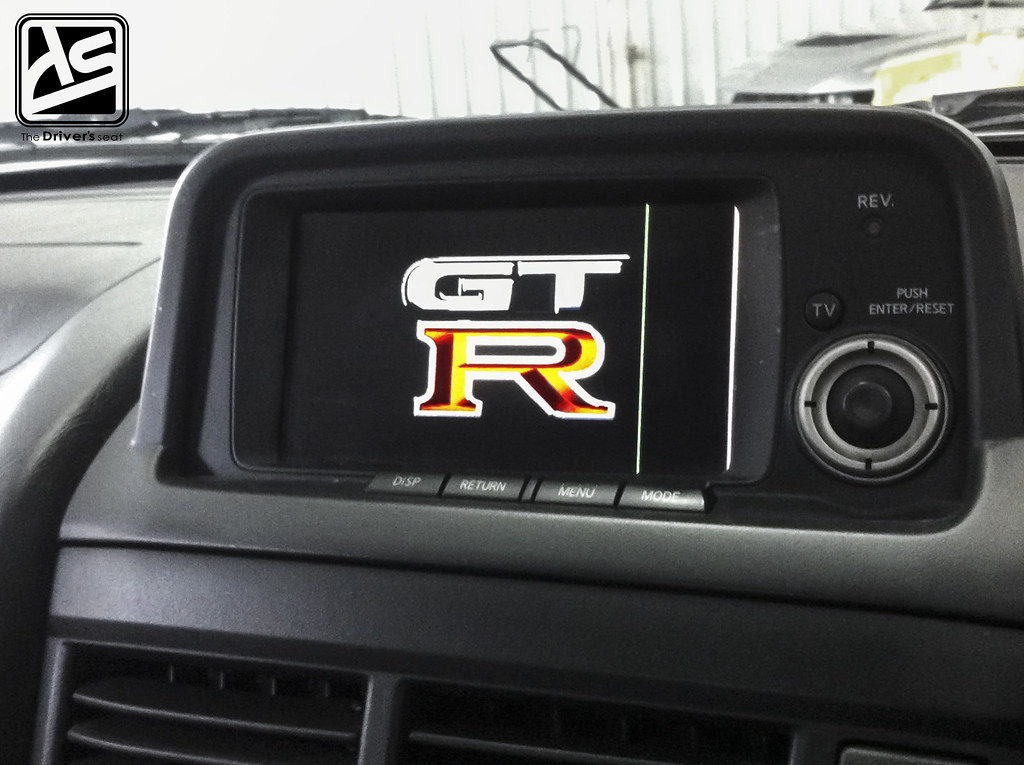 Another note worthy addition to the interior is a LCD multifunction display on the center of the dashboard, which shows seven different live readings of engine and vehicle statistics such as boost pressure, oil and water temperature, among others. Seeing that this is a V-spec model, intake and exhaust gas temperatures are also displayed. 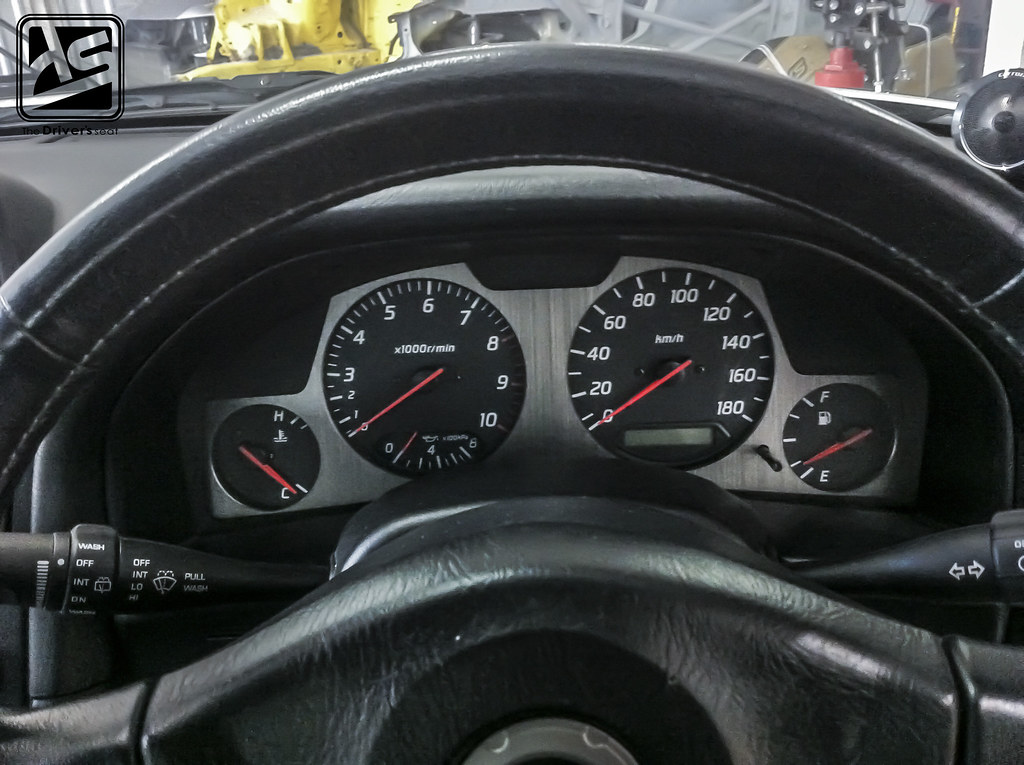 Instrument cluster with a modest 180km/h speedo which limits the car’s performance based on the restrictions that were placed during production. 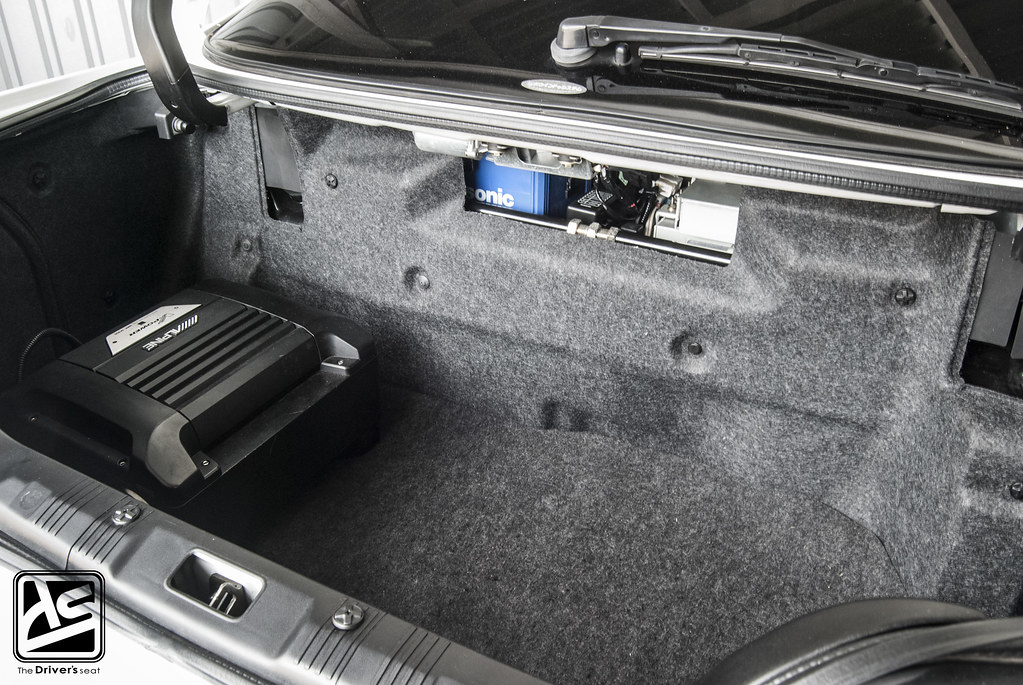 Working our way to the trunk, there was an Alpine amplifier installed, it seems the previous owner was quite the music fan. In addition, the trunk is also where the battery, the ATTESA E-TS Pro, the Super HICAS 4WD steering and a few other ECUs reside. The V-spec II features a special ATTESA E-TS Pro system which differs from the standard ATTESA E-TS in a few ways. The ATTESA E-TS controls the front to rear torque-split, the Pro system is also capable of left-and-right torque split to the rear wheels. This is done via an active rear LSD, a special feature found on the R34 GT-R V-spec II models. Whereas the normal GT-R’s are equipped with a conventional mechanical differntial. 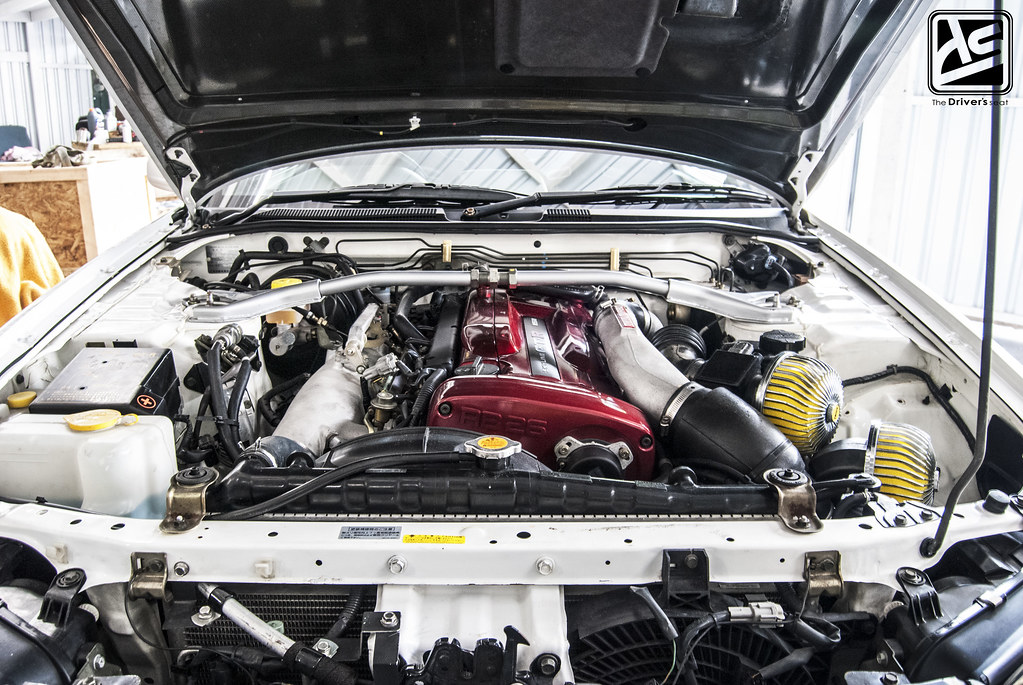 Upon opening the hood, immediately you notice the weight saved by the use of carbon fibre, yet another feature reserved for the V-spec II models.

The intake of the RB26DETT varies from other RB-series motors in that it has six individual throttle bodies instead of a single throttle body. In addition, the engine uses a parallel twin-turbo system, using a pair of T28-type ceramic turbochargers. The only upgrade done in the engine bay is the stock intake box was swapped out for two mushroom air filters. 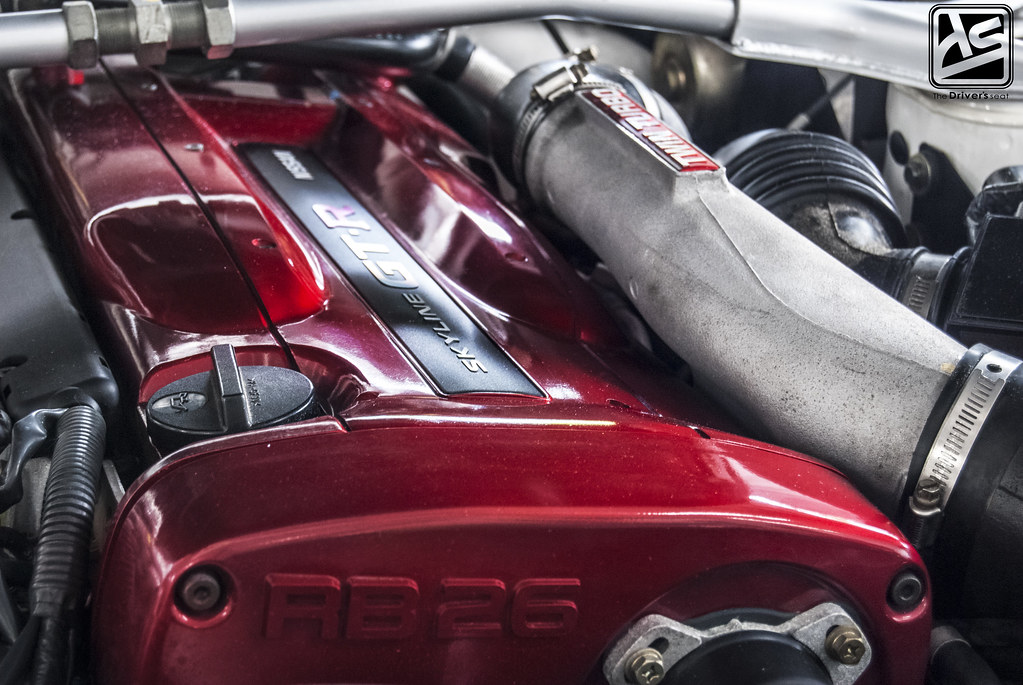 Similar to the 2JZ-GTE, the RB26DETT has a cast iron block which is fully capable of producing good power without swapping out the internals. 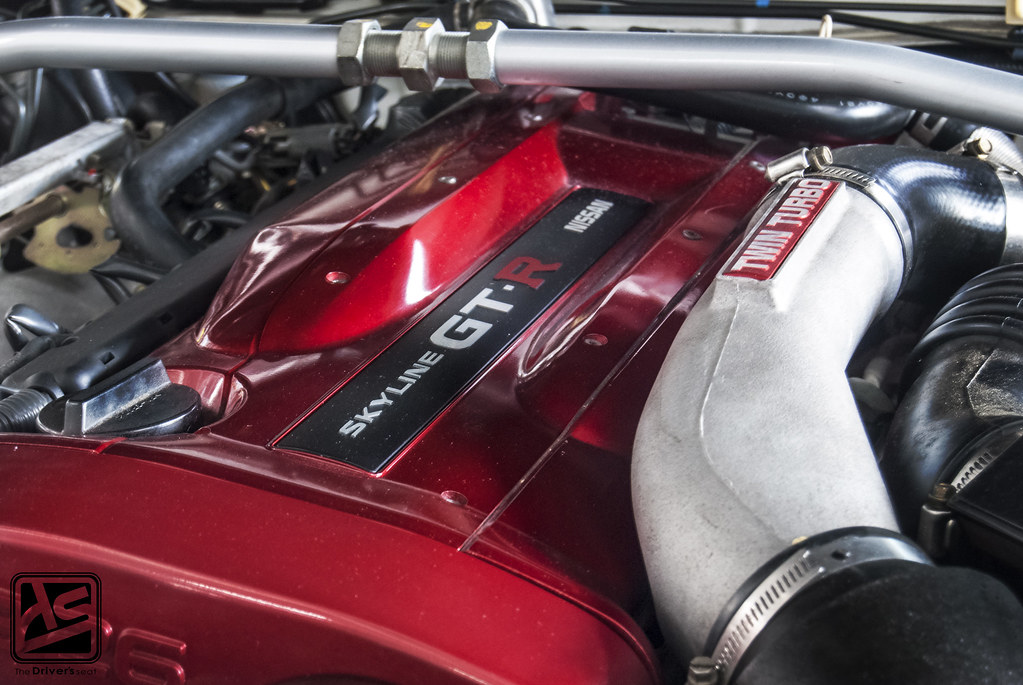 Close up of the Cherry Red Effect valve cover… 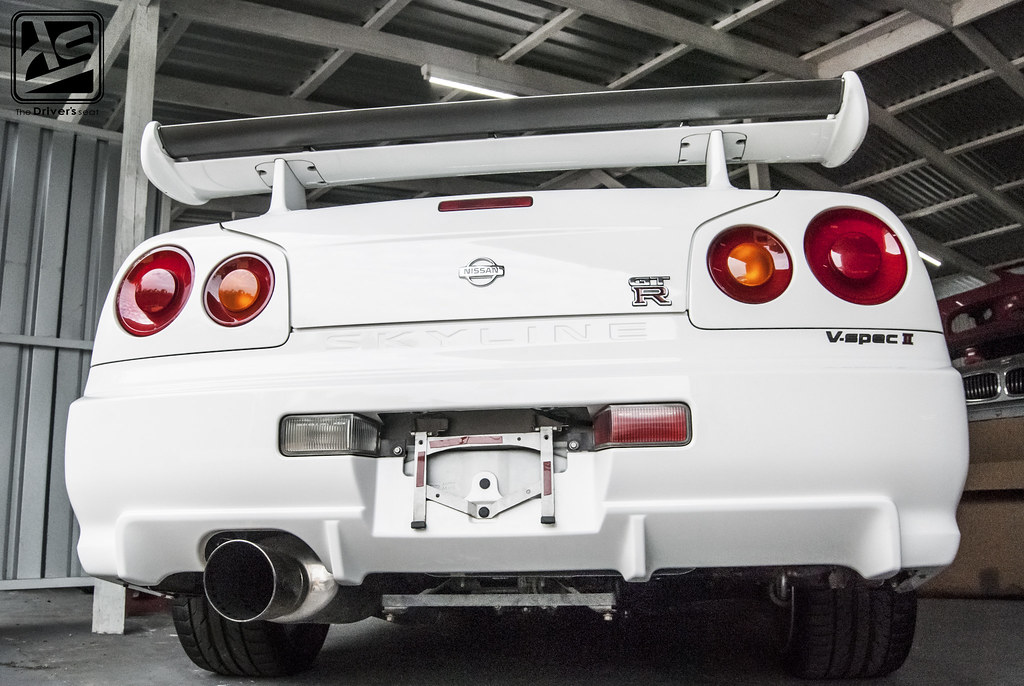 That brings us to the end of yet another post featuring one of Japan’s most iconic cars, hopefully the guys can soon pull themselves aways from this beauty and put the finishing touches on the Supra.